A Doorman who lost his temper and knocked out a drunk clubber has appeared in court. 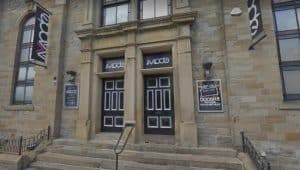 Irfan Shazad punched his victim so hard he ended up being rushed to hospital where he was found to have a fractured nose.

Burnley Crown Court heard how the doorman lost his temper with reveller Kieron Morris during closing time at Mode nightclub in the town in January of last year.

Explaining the incident, prosecutor Richard Bennett said Shazad, 33, punched Mr Morris from behind after the clubber became threatening outside of the doors at around 6am, when the venue was closing.

He said: “The victim had spent the evening drinking, and in the early hours ended up in Mode nightclub where his recollection of events ends.

“By his own admission he was so drunk he can’t recall what happened and only remembers waking up in the Royal Preston Hospital.”

He went on to describe how Mr Morris had to be ‘physically persuaded’ to leave the club at closing time, when he was ejected by two bouncers to the front of the venue.

He then became argumentative and threatening towards Shazad and his colleague – with defence barrister Neil Howard saying the bouncer was racially abused by the victim.

Shortly after that, while Mr Morris was said to be arguing with a third party, the second doorman described hearing a loud thud.

Mr Bennett said: “Mr Morris had been punched to the ground by the defendant. What had happened was the defendant approached him from behind and punched him once to the back of the head, causing what was later diagnosed as a nasal fracture.”

Judge Sara Dodd said: “For reasons that I don’t think you understand, you walked up to the complainant and you punched him once and he went to the floor. As a result he was injured and had to spend time in hospital.

“All the training that you would have had in the decade that you worked in the industry must have told you that is not how you conduct yourself in such circumstances.

“This was a single blow and you are remorseful. In reality you have no previous convictions and have not committed and offence since this incident. You have lost the employment you had for 10 years, you have lost the respect of your community and I suspect some self-respect.

Guilty verdict for boss who supplied unlicensed security to school