A DOOR supervisor and company secretary faces the loss of his financial assets because he worked illegally for three years. 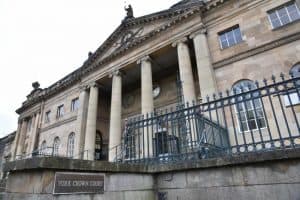 In 2014, when he held a door supervisor’s licence, he didn’t tell the Security Industry Authority he had been convicted of perverting the course of justice and given a six-month suspended prison sentence, said Peter Rollins, prosecuting.

But he still needed a licence because he was a director of F1 Security Services, and therefore still part of the security industry, said Mr Rollins for the Security Industry Authority.

He applied for a new licence in April 2020, but was refused.

Downs, 54, of Wetherby Road, Acomb, pleaded guilty to working in the security industry without a licence from September 2017 to April 2020.

Recorder Chris Smith said the regulations protected the public who came into contact with door and security staff.

He sentenced Downs to an 18-month community order with 60 hours’ unpaid work. Later this year, the authority will try to confiscate his assets.

Downs’ barrister Sean Smith said he had not worked on the doors during the period he didn’t have a licence.

“He describes looking after the accounts and doing property management,” said the defence barrister. Downs had spent £75,000 on ensuring his “front line staff” had proper training.

The perverting of justice conviction related to false accusations he had made about his estranged wife to police, said Mr Smith.