A ‘POPULAR Worcester lad’ and security guard has finally come home after being in hospital with Covid for 71 days. 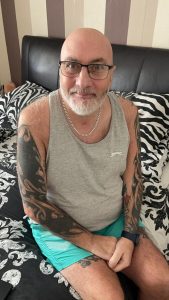 Mark Newman, 54, is recuperating with fiancee Donna Box, 52, who he asked to marry him while he was in hospital.

The pair – who both work at Worcestershire Royal Hospital – got engaged after realising he was recovering in a bed in the bay of the ward where they first met.

Mr Newman was fighting for his life in the intensive care unit for two months and spent three weeks in a coma after catching coronavirus.

He was moved on to another ward to recuperate after beating the virus and had to endure major physiotherapy, but it was there in his hospital bed, he decided to ask Donna to marry him.

She said: “After not being able to see him for weeks and weeks I was finally able to visit him in the Avon ward. He was in bed 11, bay 5, which is where we first met. I was working as a nurse on a patient and had to call security, Mark came to the bed and the rest is history.

When we realised he was recuperating in the same bed where we met, we couldn’t believe it. He asked me to marry him there and then.”

Donna said: “He is living upstairs, he can only manage a few steps to the bathroom and back a day, I am doing almost everything for him. It is going to be a long old road until he is back to his old self. I am just so grateful to have him home. I thought I was going to lose him at one point.

“He has now got his voice back which is lovely, he has lost an awful lot of weight, his sense of taste hasn’t come back and he will need time to relearn how to do things. But, he is doing so well. He took his first steps in hospital on Friday (April 19) and he was discharged on the Tuesday.

It has been an emotional time, Mark has been in tears a lot, especially when we watch the video of him leaving hospital. He has made life long friends in the ICU and all the nurses and staff were absolutely amazing with him.”

Mr Newman added: “I am just overwhelmed by it all. I have had people from school phone up, old friends and family checking in to make sure I am OK. The response I have had from people are I work with and, of course, the amazing girls at the hospital who literally helped me get back on my feet.

“I am just so lucky to be here and so grateful to be back home with the love of my life where I belong. This whole experience has made me grab life with two hands and make the most of it every day. I am lucky to be alive.”