A woman who attacked the doorman of a Street pub while he was trying to help a colleague deal with an incident in the female toilets has been given a conditional discharge by magistrates. 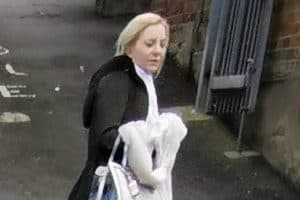 Becky Loveridge was screaming and shouting at the male telling him to get out and refused his repeated requests for her to leave.

When he tried to take her by the arm and escort her outside she started kicking and lashing out and then bit and scratched him on the upper arm.

She was placed in handcuffs and the victim made a citizen’s arrest until the police arrived and detained her.

The 21-year-old defendant, of Halvesgreaves Court, Kidderminster, appeared in the dock before Somerset Magistrates at Yeovil where she pleaded guilty to assaulting Grant Harris by beating him during the incident at the Lantokay pub in Street on September 14 last year.

Emma Lenanton, prosecuting, said that Loveridge went to the Wetherspoons pub while Mr Harris was working as a doorman.

During the evening he was called to the ladies’ toilets to assist the duty manager in dealing with a female who had become unwell.

“Loveridge entered the toilets and became confrontational towards them as they were trying to assist the female and was questioning why Mr Harris was in the female toilets,” she said.

“The defendant was asked to leave the toilets but she refused and continued to be difficult and would not leave.

“The incident lasted about 15 minutes and during that time the victim tried to take hold of her arm and escort her out of the toilets but she started to kick and hit out whilst screaming.

“During this she bit Mr Harris to the left upper arm and scratched his right arm causing the skin to break.”

She was put in handcuffs and a citizen’s arrest was made before the police were called and removed her from the scene.

During the arrest and the onwards journey to the police station, Loveridge continued to be obstructive towards the officers.

Mr Harris wrote a victim impact statement which was read to the court in which he said the whole incident lasted for about 15 to 20 minutes.

“I have done a lot of conflict management training and made an extra effort to try and engage with this defendant to prevent the situation escalating but that was unsuccessful,” he said.

As a result of the assault, Mr Harris had scratches to his right bicep that drew blood and a bite mark to his left shoulder.

The court was told that Loveridge had originally been issued with a conditional caution by the police but she had failed to engage with the required alcohol awareness course on September 18 so was brought to court.

Defending solicitor Ray Peters said that his client had been unemployed since November 2017 and was currently going through the courts in relation to an unfair dismissal case.

“Because this is ongoing she has very little income and only earns occasional money through agencies so she was unable to pay the compensation she was ordered to with the caution,” he said.

“It was all rather unfortunate because that would have been a sensible way of disposing of with the matter.

“That night she had not drunk to any great excess and cannot offer any sensible reason as to why she behaved in the way she did.

“However she kept asking the complainant why he was asking her to leave and when he said he didn’t have to give her a reason she became more and more agitated and behaved in the way we have heard.”

The magistrates told Loveridge the doorman was in the toilets with good cause to help somebody who was distressed and said she had seen it fit to abuse him for around 15 minutes and that was not good.

They imposed a six month conditional discharge and ordered the defendant to pay Mr Harris £50 compensation along with £85 costs and a £21 victim surcharge.

SCREAMING Solicitor attacked a Doorman with one of her Stiletto shoes