A VIOLENT shoplifter who stabbed a security officer with a syringe needle has been banned from every Range and Iceland store in Greater Manchester. 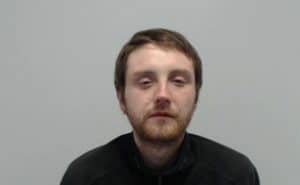 The Honorary Recorder of Bolton, Judge Martin Walsh, jailed 29-year-old Daniel Davies for three years and four months after hearing how the drug addict committed a series of offences at the Parsonage Retail Park in Leigh on February 8, 13 and March 5.

Davies, who appeared in court via a video link from prison, pleaded guilty to three counts of affray, three offences of theft, causing actual bodily harm, assault, using threatening behaviour and threatening with a blade.

Denise Fitzpatrick, prosecuting, told how Davies, of no fixed address, was spotted stealing cleaning products from The Range in Leigh on February 8 by teenage sales assistant Ben Rowlands.

When asked about the items he had put in his bag, Davies pulled out a Stanley knife blade, pointed it at Mr Rowlands face and shouted, “I’ll f***ing stab you with this”.

A female supervisor also had the blade pointed at her and Davies ran off.

Miss Fitzpatrick told how team leader Callum Bland recognised him and, again, Davies threatened to stab him when he was stopped at the exit.

He had a screwdriver in his hand and got away, making his way to The Range where he carried out more shoplifting.

He was challenged again by supervisor Lisa Van Zelst, who took hold of his bag and he tried to stab her arm with his screwdriver as they struggled.

As the bag ripped Davies fell backwards into a customer who was waiting for a taxi, knocking her to the ground.

“I have got a f***ing needle in my pocket and I’ll stab you with that,” Davies told Ms Van Zelst as she chased after him.

On March 3 Davies targeted the Sainsbury’s store in Leigh where store detective Michael Tyldesley detained him and took him to an office.

When Davies pulled out a screwdriver, Mr Tyldesley grabbed hold of his arm and then felt a scratch on his finger. The shoplifter had stabbed him with a needle.

“As soon as he felt the scratch he let go of Daniel Davies, who ran from the office,” said Miss Fitzpatrick.

Davies was described as a “persistent serial offender”, but Claire Brocklebank, defending, said that at the time of the thefts he was homeless, sleeping in an abandoned building and had fallen into heroin use.

Sentencing Davies, Judge Walsh told him he had come “perilously close” to being charged with robberies.

“Your offending behaviour is almost always a result of a long-standing addiction to drink and drugs,” said Judge Walsh.