Neil Stead, 39, who is from Hartlepool, must undergo a 90-day alcohol abstinence check following the attack at a town bar. 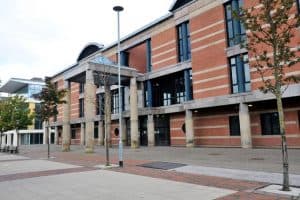 Stead, who was himself a doorman, has now lost his licence to operate and he is unemployed, Teesside Crown Court was told.

Prosecutor Rachel Masters said that on August 8 last year at 12.45am the doorman noticed that a colleague was involved in a fight with two men and he helped him to get them outside.

Stead was the brother of one of the men and he grabbed the doorman’s neck and squeezed it until he lost consciousness.

A number of other people joined in punching the doorman.

Stead left the bar as the doorman lay unconscious but he was arrested nearby as police rushed to investigate.

The doorman said in a victim impact statement which Miss Masters read to the court: “I now feel fear when I am doing my job.”

Stephen Constantine, defending, said that the Probation Service felt that they could work with Stead on his rehabilitation.

Passing sentence, Judge Howard Crowson told Stead: “It wasn’t your fight and you joined in

”As it happened fortunately the medical teams were not needed. But it’s a dangerous way to treat anybody else.”

Stead, of Oxford Road, was sentenced to 12 months jail, which was suspended for 12 months, and ordered to complete 180 hours unpaid work and the 90-day alcohol abstinence check.

He must also pay £200 compensation to the doorman after he pleaded guilty to actual bodily harm assault.