Two companies based on Teesside have united in a bid to ease a shortage in licensed workers for the security industry. 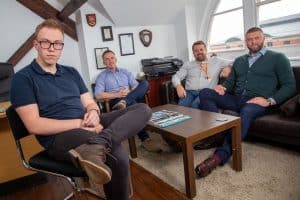 Middlesbrough’s Associated Risks Group (ARG) has partnered with Hartlepool’s Orangebox Training Solutions to lay on courses, which are free for the unemployed or people earning less than £17,200 a year.

At the end of the course, ARG and Orangebox will work with employers to ensure learners hold the required £190 Security Industry Authority licence at no cost to them.

Paul Hutchinson, ARG’s managing director, said: “Once they have that SIA badge then they can go straight into the industry.

“With the qualifications they will learn, they can then work in event security, such as festivals/gigs, door security or normal security.

“We currently don’t have enough people within the industry licensed for whatever reason, maybe it’s because of covid-19 and people taking on new jobs, maybe they haven’t renewed their SIA badge.

“The security industry in the North-East is becoming huge but we don’t have the number of SIA licensed operatives in order to fill all the roles that we have.”

The courses will cover SIA door supervision, First Aid, the safeguarding and prevent, counter terrorism aspects and the unique selling point is the added bonus of covert foot surveillance.

The plan is to roll the three-week courses out in other areas of the region once more employers have got on board to get more people into work.

Paul, who was previously a firearms officer in the police and part of former Labour MP Peter Mandelson’s residential security team, continued: “Those enrolled will be learning to follow a suspect like they would in the police.

“The surveillance is the different element to this – no one else is doing it in the country as part of their courses.

“We are unique in delivering this course and I know that from the 14 years I’ve been training and operating in Protective Security Management that we also want to raise standards and we have our own high expectations.”

Orangebox’s CEO Simon Corbett, a former covert cop himself, said: “The idea is that there are lots of opportunities in the North-East to train people and get them employment within the community sector.

“We want to make sure people are trained to the highest standards to gain the best opportunity available to them. We are working with employers all over the North-East and we want to work with more as we look to run programmes in more areas.”

Paul’s 25-year-old son, Sam, from Middlesbrough, has already enrolled on the first course.

Sam said: “Hopefully I can get my licence with my old man. Working with my dad in events security is what we have discussed.”

Graeme McLane, one of the trainers, said: “I started in door supervision many years ago and met Paul who trained me in Close Protection and surveillance. I then started as part of Qatar Prime Minster close protection team.

“Recently I moved into training and this is a great opportunity for people wanting to gain employment in the industry. We will create opportunities for the right individuals and that can lead to a progression in the industry.”

Lancashire security boss must pay £6,548 for supplying unlicensed security or go to jail