Father of one Dave Goddard, 50, AKA “Mighty Man” who spent years chatting to punters died suddenly on Thursday, November 25 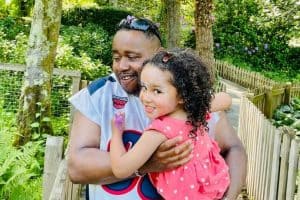 A legendary doorman who brought joy to hundreds of people across Reading as they queued to get into one of the town’s most-loved nightspots has died suddenly at the age of 50.

Tributes have been paid to dad Dave Goddard, who died at his home in Shinfield on Thursday, November 25.

His wife Jessica said he died of a suspected cardiac arrest.

Dave, who was known as “Mighty Man” was well-known for being one of the faces of the After Dark nightclub in London Street, which remains one of the most fondly remembered nightspots in the town despite losing its licence over noise issues earlier this year.

Neil Richards, who was manager of the club for many years, was a good friend of Mr Goddard.

He said: “This morning I awoke to the incredibly sad news that Dave Goddard, known to all as Mighty Man had passed away.

“Dave was a good friend and colleague to me for many years and I always knew that he had my back.

“Sometimes people say that only the good die young and there is no doubt whatsoever that Dave was a good man.

“It’s not an exaggeration to say that The AD (After Dark) that we all knew and loved wouldn’t have been the AD without Dave.

“He was an essential part of a night at The AD making people feel not only welcome but also safe and secure.

“The AD was of course only a part of Dave’s life.

“He also had a “proper” job and was very much a family man.

“He was a loving husband and father to Jessica and Gigi and I can’t imagine what they must be going through at the moment.”

His wife told BerkshireLive: “Everyone will remember Dave as the doorman at the After Dark and how brilliant he was at that.

“But he was also brilliant at his day job.

“He worked at Verizon, just off Junction 11 as a telecommunications manager.

“His job was basically to make sure various teams across the world were speaking to each other, and he was really good at it.

“He was pretty much Mr Verizon.

“He was just inspirational to the people who came to work there – I know there were some people who saw him as their mentor.”

The couple have a four-and-a-half year old daughter called Genevieve, or “Gigi” and Jessica said her husband was “just the most phenomenal dad”.

She said: “He was just so incredibly devoted and loving.

“Family was a huge thing to him.

“We got married in Jamaica because his maternal grandmother Aunt Mae wasn’t able to travel.

“I’ve been contacted by his family from places like Barbados, Toronto and Florida, all wanting to talk to me about how wonderful he was.”

Dave lived in the Reading area for most of his life.

He went to school at the former Highlands Primary School in Tilehurst , Crosfields in Shinfield and the former Bearwood College, now Reddam House.

Mrs Goddard said: “I remember we were in Spain once, and his old school friend got wind we were were.

“They’d not seen each other in 25 years, but he jumped on his motorbike to drive over to see us – that’s what Dave could do to people.”

She added something very similar happened on another trip to Los Angeles.

She said former After Dark regulars will remember Dave for his “raps and Americanisms” as they waited to get into the club, to the point a lot of people thought he was from America.

“He was a mischievous, cheeky boy who would had a gift of being able to make people laugh.

“He loved the gym, he loved badly made old American films and he really loved American politics.

“I remember meeting Americans on cruises who’d tell me he knew more about politics in their state than they did!”

His wife said he was “writing music right up until the end of his life and his creative flair never ceased”.

A funeral has yet to be arranged, but details will be posted on Dave’s Facebook page once they are known.