In simplest terms, trespassing is the act of a person being somewhere that they legally shouldn’t be. Typically, this refers to private property entered or ventured onto without the owner’s permission.

When is Trespassing Considered a Crime?

Under British law, entering a property is legal if the owner of said property has extended an invitation to the visitor. However, if that invitation is rescinded (or is allowed to expire) by the owner (or a representative of the owner, such as a staff member or security operative) and the other person subsequently fails to leave, they are trespassing.

For example, if you buy a ticket to a museum, but fail to leave by closing time, you are legally considered to be trespassing on the museum’s property, despite having paid for a ticket.

The reality is that most of us have trespassed, either knowingly or otherwise, at some time or another. All land in the UK belongs to somebody and, unless public access is permitted by the owner, anybody who sets foot on that land without permission is, by definition, a trespasser. This is the reason that trespassing by itself is usually considered to be a tort rather than an outright crime.

If the trespass does not form part of a criminal act, and no intent to do so is apparent, the property owner’s options are limited. They may pursue legal action and sue the trespasser for the hypothetical value of whatever gains made by the trespass. They may also obtain a court injunction barring the trespasser from returning to the property, but there isn’t much else they can do under such circumstances.

The law places some emphasis on the trespasser’s foreknowledge of their transgression. If the person leaves in a quick and orderly fashion after being informed that they are trespassing, it’s unlikely that criminal charges can or will be brought against them. 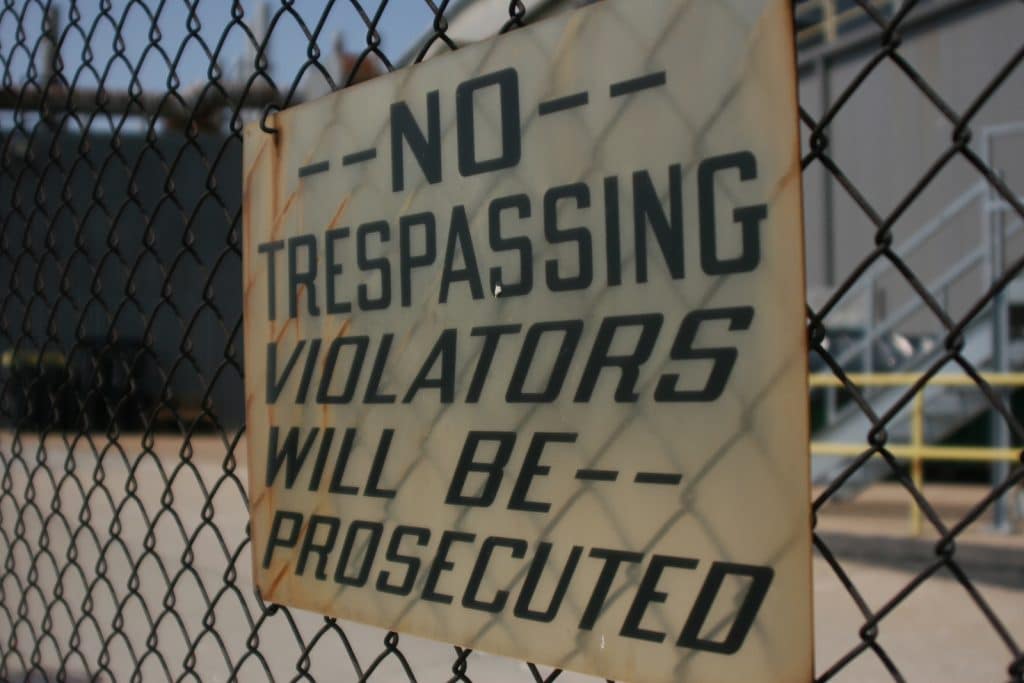 The law may also protect trespassers in instances where a property owner has left their property in a dangerous condition, causing injury to the trespasser.

However, the law comes down fairly hard on squatters (people who opt to live illegally in someone else’s property). The justification for this lies with the idea that if a person enters a property without the legal right to do so, it is assumed that they are aware that they are behaving illegally.

In such cases, trespassers can be sent to prison for a maximum of 51 weeks or find themselves subject to an unlimited fine (we can debate the merits of demanding money from people so poor they resort to living in abandoned buildings at some other time).

Trespass to land involves a person encroaching upon land that does not belong to them (without an invitation or after an invitation has been formally withdrawn). In cases such as these, the landowner or their representative is instructed to take preventative measures against the trespasser(s).

These measures can include putting up signs explaining that the area is not open to the public or erecting walls around the area to keep people out. It may also include verbally warning trespassers that they are violating private property or, in cases or repeated violations, obtaining an injunction against the trespasser that threatens legal consequences should the infractions continue.

If the trespasser is violent, reasonable force may be used to restrain them.

Trespass to the person occurs under three categories. These are assault, battery and false imprisonment.

Assault may involve physical contact but doesn’t necessarily have to. This is the main difference between assault and battery. Assault may occur without a person being physically touched by another, whereas battery always requires physical contact. A credible threat (i.e., a threat of violence issued with the means to carry it out), may be considered as an assault under UK law.

False imprisonment occurs whenever a person’s freedom of movement is illegally restricted, disallowing them from leaving a particular place or places. It is not considered false imprisonment to block a person’s path, so long as they still have the option to leave via a different route. However, if a person is being forcefully confined to a specific area, they are being falsely imprisoned and trespass to the person will be considered to have taken place.

See our guide to LED torches and how they can help catch out trespassers.

Self Defence Against Trespassers

UK law has a slightly open-ended definition of what does and does not constitute ‘reasonable force’. The term effectively describes any measures necessary to protect oneself or one’s property from harmful action by others.

Essentially, in order to be considered ‘reasonable’ any force used in response to unlawful aggression must be proportionate to the threat being offered at the time.

UK homeowners and renters do not have to wait to be attacked in order to defend themselves in instances of trespass or home invasion.

However, harming an intruder after they cease to present a threat stops being considered ‘reasonable force’ and becomes ‘excessive force’, or even ‘assault’ in the eyes of the law.

If it can be proved that the person protecting themselves acted in a manner that they believed was necessary at the time and that the force used was proportional to the violence offered, then it’s likely that no criminal charges will be pressed. However, by its very nature, this can be difficult to judge, so it is best to always err on the side of caution.

What Does This Mean for Security Staff?

Keep in mind that, in most cases, trespassing is not a criminal offence, though legal action can be taken both for and against trespassers, depending on the circumstances of the transgression.

A door supervisor has the right to refuse admission to anybody that appears to be violating the rules of the premises, as well as any criminal or licensing laws, or else if they are simply unwelcome from the point-of-view of the establishment or its owner(s).

Door supervisors also have the right to search and eject people (by force, if necessary) from the premises if those people meet any or all of the criteria above.

Should the person somehow gain entry after being turned away at the door, maybe being alerted by someone watching CCTV, or attempt to stay after being asked to leave, they are trespassing and should be asked to leave or else escorted to the nearest exit.

However, UK law does not furnish security personnel with any special powers or protections beyond those of the average civilian. Essentially, if a door supervisor is attacked while at work, the law does not treat this the same way as it would if it were a first responder or police officer being attacked. It is, in the legal view, simply a case of one civilian attacking another. Ergo, although security guards are allowed to remove potentially violent people from situations in which those people might harm themselves or others, they must be very careful when doing so.

See our reviews of heated jackets, if you are a security officer or door supervisor and work outside, then one of these jackets will keep you warm throughout your shift.

When confronting a trespasser, it is important to speak in a calm, clear manner. The effective security operative should switch on their body camera (if one is being worn) and call for backup, approach the trespasser calmly, before explaining to the trespasser why they are being asked to leave the area in question.

In most cases, the trespasser will simply agree to leave. However, in some cases, they will not and may become belligerent or even aggressive. In these cases, it is important to repeat the order, making it clear that their ejection is not going to be the subject of any negotiation or debate.

It helps to repeat the order using same wording in the same way during interactions like this, as doing so reinforces the point that the decision has been made and is now beyond their control.

Should the trespasser persist, remind them that they can be forcibly removed if necessary and that the police can (and will) be called if they refuse to leave of their own volition.

At this point, it can be useful to change tactics slightly and appeal to the trespasser on friendlier terms as you try one final time to encourage them to leave peacefully and of their own accord.

Not only is this the decent thing to do, it also looks good in court, should it come to that, and shows that the operative did everything in their power to avoid conflict, rather than being overly eager to harm another person (a stereotype sometimes aimed at door supervisors).

If a trespasser is about to be

removed by force, any other operatives working nearby must be made aware of the situation. A colleague should then make themselves visible to the trespasser, hopefully demonstrating to him or her that they are outnumbered. This colleague can also act as a witness if the trespasser goes on to allege that they were assaulted or that excessive force was used against them.

After this, if the trespasser still refuses to leave, they will have to be escorted off of the premises via the most convenient exit. Where possible, this should be achieved by two or more operatives.

Remember that reasonable force is only acceptable if it is used in proportion to a threat, so, while the process may involve no small amount of aggression, it can only turn violent should the need for self defence arise.

In some cases, such as instances of violent assault, this procedure will not be possible. Instead, the trespasser(s) must be physically removed as quickly as the situation allows.

It is important to remember that a security guard has no power over a trespasser once he or she is no longer trespassing. If a trespasser has been ejected into the street, they can simply return to their business and must not be subject to any further restraint or conflict with the operative unless they try to regain access, become violent or choose to commit a crime.

In cases where a person has become violent, or where potentially violent people outnumber the operatives, the police should always be called. It is also possible to place a person under citizen’s arrest, which can be carried out by any member of the British public in order to prevent a person harming themselves or others, damaging property, suffering a physical injury or attempting escape before the police can arrive.

Remember that any/all incidents of trespassing, no matter how minor, should be logged in the incident book and also reported to the duty manager and possibly the owner of the premises as well.