James Ferguson struck and spat on Andrew Hall at a hotel in Glasgow’s Dennistoun, as well as taking his socks off “and repeatedly rubbed one against Mr Hall’s head”. 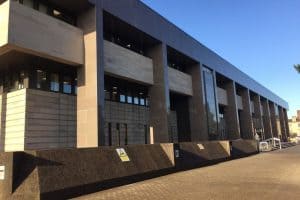 A thug who assaulted a security guard thanked a sheriff for giving him a lighter sentence.

James Ferguson struck and spat on Andrew Hall at a hotel in Glasgow’s Dennistoun on October 12, 2020.

The 33-year-old pled guilty to the assault yesterday at Glasgow Sheriff Court.

Before leaving the dock he said: “Thank you for not giving me a massive one [sentence].”

The court heard a drunk Ferguson entered the reception area and rubbed against Mr Hall.

Prosecutor Mark Allan added: “He took his socks off and repeatedly rubbed one against Mr Hall’s head.

“He then used his own shoes and struck Mr Hall on the side of his head.

“There was a struggle between the two men and when Mr Hall tried to bring Ferguson to the floor, he was then spat on the face.”

Paul McCue, defending, told the court that Ferguson expressed regret and apologises for his behaviour.

Sheriff Jackson told Ferguson that he had been repeatedly offered help which failed which resulted in him coming back for prison sentences.

Ferguson said: “I want to change my life, I just make wrong decisions when I’m drunk, I just don’t want to drink.”

Mr Jackson replied: “You did the right thing coming to court to save time and money but this was a serious matter in the middle of a pandemic and you should have known better.”

The sheriff then sentenced Ferguson where he made the “thank you” comment.