A thug who brandished a Russian police baton at a Doorman after being refused entry to an Edinburgh nightclub has been placed on a restriction order. 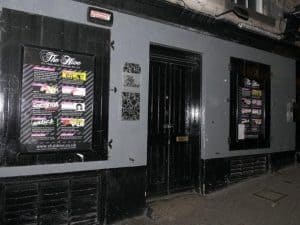 Brian Nicholson pulled the extendable baton from his jacket and waved the weapon at doorman Mohammed Salahuddin outside the entrance to the capital’s Hive nightclub.

Nicholson, 49, was refused entry after turning up at the popular city centre haunt in a drunken state in September, 2019.

An argument broke out between the pair and Nicholson began shouting s swearing before he grabbed at the employee’s body security camera.

Mr Salahuddin then pushed the thug away from him and Nicholson reached in to his jacket and pulled out the foot-long Russian police stick.

He then swore before waving the spiked baton at him.

Colleagues rushed to help the door steward and Nicholson was soon restrained and the dangerous weapon was taken from him.

Police were called in to deal with the incident and Nicholson, of Rutherford Drive, Edinburgh, was arrested and subsequently spent seven days in custody.

Sheriff Douglas Keir sentenced the lout to a nine-month restriction of liberty order whereby he has stay within his home address between 7pm and 7am.

Previously fiscal depute Clare Kennedy told the court Nicholson arrived at The Hive nightclub at the city’s Niddry Street on September 28, 2019, and during the row made a grab for the doorman’s body camera.

She said: “The complainer pushed his hand away and Mr Nicholson called the complainer ‘a f*****g c***’ and refused to move away from the entrance to the nightclub.

“Mr Nicholson then took from inside his jacket pocket the baton and waved it at the complainer and continued shouting and swearing.

“This was observed by another member of staff and the colleague managed to restrain Mr Nicholson and remove the baton from him and then police were called.”

Ms Kennedy described the baton as being “made of metal with a rubber handle and around one foot in length” and that the weapon “had a metal spike on the end”.

York company director must pay £40,000 in proceeds of crime