Nathan Barrett caused the injuries by punching the victim to the face after he was ejected from The Liquorist, on Greek Street. 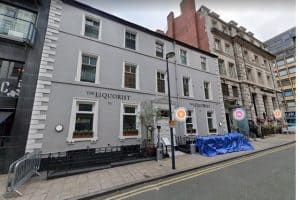 Leeds Crown Court heard Barrett carried out the attack in the early hours of May 19, 2019.

Edward Lucas, prosecuting, said the 31-year-old defendant was with a group of others who were “misbehaving” inside the bar and an argument broke out with another group of people.

Barrett was seen to be “agitated and hostile” and staff decided that he should be ejected from the bar.

The prosecutor said Barrett shouted threats to others as he was escorted to the exit by five doormen.

He continued to be aggressive once outside, saying he would like to see someone stop him from going back inside.

Barrett then walked over to one of the doormen and punched him without warning to the side of the face.

The victim suffered a broken jaw in two places and had to undergo an operation to have metal plates fitted.

Barrett, of Brownberrie Walk, Horsforth, was arrested and denied assaulting anyone.

He pleaded guilty to inflicting grievous bodily harm on the day of his trial.

Barrett has 15 previous convictions for 32 offences.

They include convictions for assault occasioning actual bodily harm, drug and driving offences.

Caroline Abrahams, mitigating, asked that Barrett be given credit for his guilty plea.

Ms Abrahams said her client was in a stable relationship and ran a used car business based in Bradford.

Judge Neil Clark said the offence was too serious to impose anything other than an immediate prison sentence.

Jailing Barrett for 16 months, he said: “What you were doing was striking someone going about their lawful business.

“You ended up badly injuring that doorman.”

Cambridge doorman who took his own life ‘let down’ by police, claims dad