A man who attacked a Wetherspoons bouncer with a pint glass after he caught him in a restricted area has been jailed. Joseph Judson smashed the glass so hard across victim Muhammed Haroon’s face he needed stitches. 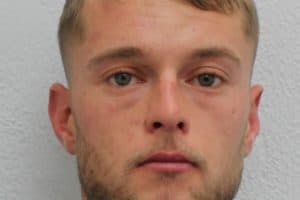 Judson, 27, from Sunderland, has been jailed for three years after being found guilty of wounding with intent following the incident at The Montagu Pyke in Soho. During a trial at Southwark Crown Court, jurors heard that on November 10, 2018, Judson had been drinking in the Wetherspoons owned pub on Charing Cross Road, and was seen climbing over a half-door and up a private staircase at 11.15pm. Mr Haroon followed and challenged him, before attempting to bring him back down the staircase.

He noticed that Judson had a fire extinguisher and a pint glass in his hands, and told him in a “reasonable manner” that he would be kicked out of the popular pub. As they reached the bottom of the stairs, Judson swung with his left hand whilst holding the glass, and hit Mr Haroon on the side of his face.

Prosecutor Richard Milne told the court there was “no cause or provocation” for this assault, which was all captured on CCTV. Other members of the security staff then restrained him and the police were called. At this point he became “very abusive and verbally aggressive” with officers, swearing at and threatening them whilst kicking the police van.

He was caught on bodycam footage making a threat towards a police officer, saying: “If I was going to do it you wouldn’t have known about it. I would have been too quick.” Judson’s behaviour continued at the police station and he was arrested and charged with wounding with intent.

Meanwhile, Mr Haroon was “bleeding heavily” and was taken to hospital with four substantial wounds to the right side of his face. He required a number of stitches and was told he was lucky not to have lost his eye. Six months after the attack, he returned to hospital for another surgical procedure as a fragment of glass remained embedded in his face.

In a victim impact statement read aloud in court, Mr Haroon said that he suffered panic attacks and depression since the incident, and has since left being a security bouncer. “It’s very distressing when people see my face and ask what happened, it makes me relive the trauma,” he said. He has been left with permanent scarring to his face, and said he becomes “upset” when he looks at himself in the mirror.

Judson had expressed remorse during his initial police interview and was under the influence of alcohol at the time of the assault. Supported by several family members in court on Friday (March 18), the judge heard that he had not consumed spirits since the event.

Sentencing him to prison, Judge Alexander Lock said: “This attack was unprovoked, it was unjustified and it was shocking to watch from the CCTV shown in court. You were aggressive, foulmouthed and behaved in a manner that was of no credit to you at all.”

He noted that as security officer, Mr Haroon had been in a more “vulnerable” position due to the public-facing nature of his role, and he did not deserve to be attacked in such a manner.

“I am sure that you will continue to reflect on what you have done and the damage and destruction you cause,” he said. “I hope that you will never find yourself in the position where you are so out of control that you can behave in such a manner.”

He was jailed for three years and must serve 18 months before being released on licence.