The vile racist past of a coward who bottled a pensioner and shouted “F*** off back to your own country, you foreign c***” to a security guard can now be laid bare. 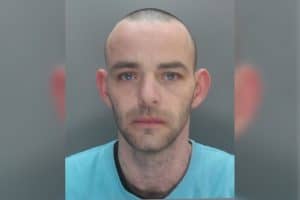 A cowardly thug who bottled a pensioner has a vile racist past including unleashing a tirade of abuse at McDonald’s.

Dennis Morgan smashed a Budweiser bottle into the face of a man twice his age after claiming his victim was friends with a rapist.

The lout’s “wholly unjustified” attack on John O’Brien left the 69-year-old with a 3cm cut just below his nose and a permanent scar.

Morgan, 34, who admitted wounding, was jailed for 20 months on Tuesday, after Liverpool Crown Court heard he already had 37 previous convictions for 75 offences.

The ECHO can now reveal his criminal record involves a series of disgraceful racist incidents, one of which he “proudly” admitted.

Police officers were at the McDonald’s restaurant in Ranelagh Street, in Liverpool city centre, at around 2am, on January 28, 2016.

They saw Morgan walk up to security guard Edward Glokner – who is of Hungarian origin – and heard him shout: “F*** off back to your own country, you foreign c***.”

When PC Yung Hoang and his colleagues told Morgan to calm down, the then 28-year-old initially appeared to back off.

But he then began to shout further racial slurs and told PC Hoang “f*** off back to Vietnam” before he was arrested.

Morgan, then of New Road in Tuebrook, admitted two counts of racially aggravated harassment at Liverpool Magistrates’ Court in April 2016.

Morgan later admitted having drunk 15 pints on the night, and claimed he normally only drank 10.

At the time he was subject to a suspended prison sentence and had just completed a curfew for stealing from his ex-girlfriend’s parents.

Defence lawyers said Morgan had struggled with alcohol and drug issues and had been homeless at the time of the McDonald’s incident.

Adam Antoszkiw, defending, said: “It’s fair to say he is a product of the system. At 11-years-old he was placed into care, and remained in and out of care for some time.”

District Judge Andrew Shaw, sentencing, said Morgan’s language and behaviour was “extremely racist” as he jailed him for 16 weeks and ordered him to pay £100 to both of his victims.

When Morgan was sentenced on that occasion, the court heard he had previous convictions for racially aggravated public order offences and assaulting a police officer.

Morgan went on to be jailed for 18 weeks in October 2017 for assaulting another constable and racially aggravated threatening behaviour.

In November 2018 he was locked up for four weeks for battery and then a further eight weeks for assaulting an emergency worker – again a racially aggravated attack.

Liverpool Crown Court was told this week that Morgan attacked Mr O’Brien when sitting drinking in Williamson Square on May 30 last year.

Can you help us keep Merseyside covered?

Two days before the attack, he had been released under investigation by police in relation to again assaulting an emergency worker.

That involved kicking a special constable to the stomach and groin during an arrest, for which he was jailed for 12 weeks in January this year.

Later that month he was jailed for 15 months for affray, which Michael Stephenson, prosecuting, said was after he called at an address in Ormskirk with a kitchen knife visible in his waistband when “collecting money” in February 2020.

Mr Stephenson said: “The house had women and children in it. The knife was produced and he seems to have been stabbing fence panels with it and shouting.”

Peter Barnett, defending, said his client had “a history of low level violence”.

He said Morgan accepted on the occasion when he attacked the OAP “he was at fault” and that he had been drinking but “wasn’t heavily intoxicated”.

The judge, Recorder Simon Parrington, told Morgan: “You attacked another man with a bottle, thereby causing him a nasty wound to the face, which has left him with a permanent scar.”

He added: “This was a particularly nasty attack. It was wholly unjustified, whether you felt it was provoked or not, it was unjustified.”

Morgan, of Malvern Road, Kensington, must serve half of his 20-month jail sentence behind bars, before he will be released on licence.