A security guard was attacked outside The Yard in the early hours of July 16. 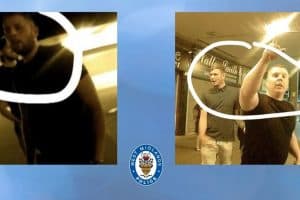 Police have released CCTV images of three men they want to trace in connection with an early assault outside a Coventry nightclub. Officers are keen to speak to the men pictured after a security guard was attacked outside The Yard in Bull Yard.

The incident happened at about 2.40am on Saturday, July 16. “If you can help us identify these men, or you are one of them, please contact 101 quoting reference number 20/524819/22,” a West Midlands Police spokesperson said.

It’s not clear if the security guard was seriously injured. The Yard prides itself as being ‘Coventry’s number one LGBTQ+ venue offering weekly cabaret, DJ’s and so much more’.

Wrexham man in court after attacking doorman and police officer