One of the stars of The Chase has recalled how he was spotted outside The Empire Music Hall in Belfast on Tuesday night – then mistaken for a bouncer! 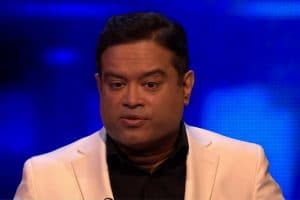 Paul Sinha, best known as ‘The Sinnerman’ on ITV’s long-running game show The Chase, shared an exchange that he overheard while standing outside the South Belfast venue on Tuesday night.

On Twitter, he wrote: “Standing outside the Empire in Belfast last night two drunk lads walked past.

‘”Is that the Sinnerman off the Chase?”

‘”Don’t be silly. Why would the Sinnerman be working as a bouncer?”‘

As it happened, the British quizzer – and sometimes comedian – was in Belfast to take part in the Empire Laughs Back comedy night, which has returned to the Botanic Avenue venue following the easing of lockdown restrictions.

Paul Sinha headlined the event on Tuesday, which was hosted by The Blame Game’s Colin Murphy. Cork comedian Emma Doran was also on the bill.

Followers of Paul Sinha joked that he might be able to combine his role of Chaser with that of a bouncer, with one saying: ‘I’d love to see it though, “You can only come in if you can tell me the year of the battle of Thermopoli. And you’re not wearing trainers.”’

Another wrote: ‘”Mate, you weren’t able to tell me the year of the names of the so called ‘Four Emperors in a Year’ so you’re not coming in!”‘