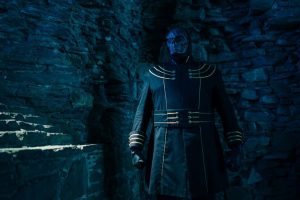 But to Doctor Who fan, Jonny – who used to work as a door supervisor on the nightclubs of Weston-super-Mare – is a far more sinister character.

Because Jonny is a new somewhat scary face on the block in the new Doctor Who series.

Jonny, who has lived in the seaside town for 17 years, plays the towering menace Passenger in the new six-part Doctor Who series Flux.

The series, currently airing on BBC, follows Doctor Jodie Whittaker and her companions as they navigate a universe-ending anomaly called the “Flux”, while dealing with enemies and secrets from the doctor’s past.

Jonny’s character is the sidekick of sinister siblings and revengers Swarm and his sister Azure who are intent on ‘destroying time’.

Jonny landed the role after a friend tagged him on Facebook on a post by Creative Casting which was looking for someone 6ft 10 or over for a new TV show.

He quickly got a response and was asked to send pictures and videos of himself which were passed on to the casting director.

Jonny, who also auditioned in 2013 to become the new Chewbacca in the Star Wars film The Force Awakens, didn’t hear anything for three weeks – and then received a phone call.

“They rang and said they wanted me for a week,” he said.

“When that happens you just have to say yes.

“To have a part in such a big show like Doctor Who is a big thing.”

What ensued was a ‘crazy couple of months’ which saw Jonny make numerous trips to Cardiff for costume fittings.

Gone was his normal daytime attire of jeans and a band t-shirt, to be replaced by a black military-style suit with gold braiding and a skull-like studded mask.

Jonny started filming in Wales the week before Christmas 2020.

But he didn’t have to learn any lines.

Passenger – the sort of chap you wouldn’t want to bump into in a dark alley while alone – is the mute lackey of the brother and sister villains.

He is a ‘being’ who has some pretty impressive powers – including the ability to ‘suck in’ his victims and keep them trapped inside of him.

“When I got to Roath Lock studios in Cardiff I even had my own trailer and dresser and was escorted to the set by runners.”

A gentle giant in real life, Jonny, who works as a tenancy sustainment manager for Live West Housing Association, has become quite fond of his scary character.

“A force comes out of my chest and attaches to someone or something and then sucks them up inside of me.

“Once they are in there, they are trapped.

“So far this series I have sucked in whole planets and quite a few people.

“Initially we make our victims feel like we are their salvation. But they soon find out we are not.

“I’m certainly not a good guy in this. In fact, I’m pretty bad.

“There’s a lot of talk about him on social media and someone has even made action figures of him.”