A Tesco security guard lost three teeth when she was elbowed in the face by a nasty thug she challenged in store. 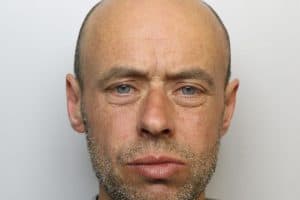 Marc Rafferty, 46, had been drinking whisky and taking someone else’s tablets when he went into the Tesco Express premises in Halifax town centre last month. He grabbed another bottle of alcohol despite only having £1 on him.

A judge was shown CCTV footage from inside the store which captured the moment the security guard, in her 60s, challenged him as he tried to leave the premises without paying. Prosecutor Phillip Adams told Bradford Crown Court that the security guard managed to take the bottle of whisky from Rafferty, but he then swung his right elbow into her face and fled.

By chance an off-duty detective inspector had seen the incident and he pursued Rafferty and detained him after showing him his police identity card. Mr Adams said during the arrest Rafferty shouted racial abuse at the officer in front of members of the public including schoolgirls.

When other police officers arrived Rafferty was handcuffed and taken into custody. The officer said he had been in the force for 21 years, but was still deeply affected and demoralised by Rafferty’s abuse of him.

The court heard that the security guard was bleeding heavily after the attack and she lost three teeth from the right hand side of her mouth. She also suffered cuts to her mouth and gums.

Jailing Rafferty for 22 months for assault, theft and racially aggravated harassment, Recorder Dapinder Singh QC also made him subject to a 10-year restraining order which bans him from going into the Tesco Express store again.

Solicitor advocate Andrew Walker, for Rafferty, said he had pleaded guilty to the offences even though he had no memory of going into the store that morning. He said Rafferty, formerly of Boyne Street, Halifax, had been homeless for a number of years and had problems with alcohol, drugs and medication.

“He is deeply sorry for what has happened,” said Mr Walker. “It happened while he was under the influence of alcohol and tablets he shouldn’t have taken.”