The doorman of a city centre pub who kneed a drunk student in the groin has been handed a suspended sentence. 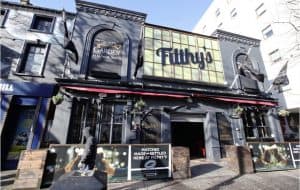 The student was one of a group of four who ‘rushed’ at Door Supervisors after being ejected from Filthy McNasty’s in October 2017.

Following the assault, the student was rushed to hospital and underwent surgery to remove his appendix and part of his intestine.

The 27-year-old appeared at a remote hearing of Belfast Crown Court via a videolink with his solicitor’s office, where he was handed a 15-month sentence, suspended for two years, by Judge Stephen Fowler QC.

The judge said that while it was acknowledged the injury caused to the student was serious, it occurred during “drunken aggression” against the outnumbered doorstaff.

In the hours prior to the early morning incident, the injured party and other students had been drinking before going to Filthy’s on the Dublin Road.

The night passed without incident, until the group were asked to leave. Due to their drunkeness, they were escorted from the premises by doorstaff.

Judge Fowler said that whilst the injured student does not have a clear recollection of what occurred outside, the incident was captured on CCTV and “has been viewed by the court.”

After the injured student and a second male left the premises without incident, they remained outside and began ‘gesturing and laughing’ at the doorstaff.

A third male who initially refused to leave joined his two friends outside and began acting aggressively, and when a fourth student appeared the group approached the doormen and tried to get back into the pub.

The court heard that at this point the students took out their mobile phones and started filming the doormen before the group ‘rushed at the doorstaff’ who were ‘outnumbered by these males.’

CCTV showed the injured party in the doorway of bar he had just been ejected from. He is then pushed out by a member of staff and Gribben is then captured on CCTV administering a knee-strike to the injured party’s groin area, which caused him to double over.

One of the students then punched Gribben in the back of the head, a fight broke out which Gribben played no further part in, then the students left.

The group went back to their student accommodation, and after suffering pain in his groin area, the injured man went to hospital at around 5am.

He underwent emergency surgery to remove his appendix, part of his intestine and suffered a perforated bowel.

Judge Fowler said a doctor was “unable to say” whether the student’s pre-existing Crohn’s played a factor in the severity of the injury, but the area where the perforation occurred was “affected by Crohn’s.”

The Judge said that after reading a victim impact statement, it was clear there had been significant physical and mental implications for the student, who was 20 at the time of the incident.

Turning to Gribben, Judge Fowler said that during an interview with police on October 26, 2017, he confirmed he had been working as a doorman on the night in question and had ejected a group due to complaints from other customers.

Gribben told police that this group then ‘displayed mob mentality’ outside the premises, and subjected them to threats. He also denied intending to cause the injury sustained, and said he was acting in self-defence.

Judge Fowler noted that Gribben has not re-offended since the incident, is no longer a doorman and has re-trained as a lorry driver.

Also noted by the Judge were Gribben lack of relevant record, settled family life and an absence of issues such as drink or drugs.

Whilst saying the use of a knee to a vulnerable area was disproportionate and resulted in very serious injury, Judge Fowler said he accepted it was done without planning or pre-meditation.

He said: “It came against a backdrop of drunken aggression directed towards the defendant and his colleagues. It has to be said that there was an element of provocation from a verbally and physically hostile group of drunken students.”

Judge Fowler imposed a suspended sentence on the former doorman and warned that any further offending with the next two years could result in this sentence being put into effect.