A YOUNG dad broke a doorman eye socket after being thrown out of bar in Southend. 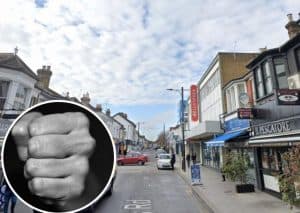 The court heard Boreham and his friends were thrown out of Revolution Southend after smoking cannabis.

The victim quit the industry after the attack.

Ms Page said: “The man walked over to ask Boreham to stop and he punched the victim near his right eye with a lot of force, then Boreham hit the man twice more in the same place.

“He then threw him to the floor and hit him another two or three times resulting in five or six punches to the same area of the man’s face.

“He was left with two fractured eye sockets. His personal statement says he it was an unprovoked attack and he was just trying to help out friends and work colleagues.

“He says he’s constantly on edge and he feels like he’s under threat and his professional confidence has been shaken and it’s also had a financial impact.”

Mitigating Nicholas Barraclough insisted Boreham accepts responsibility and has never been in trouble before.

Sentencing Boreham Judge Andrew Hurst said: “You have never been in trouble before and you were extremely drunk.

“There has to be an element of deterrent and this is not just pushing and slapping someone. You were angry and it seems to me you were looking for a fight.”

Doorman punched in face as he opened up Blackburn Nightclub, ordered to pay £100 compensation