Brad Sinclair, 26, assaulted the men while working as a doorman at Life of Riley in South Shields town centre. 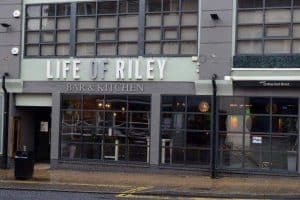 Sinclair, of Roman Road, Lawe Top, South Shields, punched one in the face and kicked him to the ground.

While his victim lay prostrate, he stamped on him and struck him nine times, magistrates in South Tyneside heard.

He also kicked another drinker who was collapsed on the ground in the stomach – and floored a third standing innocently with friends.

Magistrates ordered an all-options report into his offending, meaning he could be put behind bars when he returns to court to be sentenced on Tuesday, June 7.

Ms Kaur said: “What happens on these four occasions, he was working as a door supervisor for Life of Riley.

“He has a position of trust, which I would say he’s abused somewhat.

“On December 9, it was captured on CCTV. He has approached a male and punched him to the face and knocked him to the ground.

“While he was on the floor, he approached and stamped on him and struck him nine times.

“On January 16, he approached a male who was lying on the floor, and he is seen to kick him in the stomach.

“On January 21, he approaches a male who was almost unconscious and drops him face first onto the pavement outside.

“And on January 30, the defendant is seen to walk around a group and punch a male member of the public to the ground.

“I would say that some of these are sustained. The defendant is a man of good character in the sense that there’s no convictions.

“But he does have three cautions, the last in 2013 for actual bodily harm.”

Joanne Gatens, defending, said she accepted there was evidence Sinclair had punched and kicked.

Magistrates granted Sinclair unconditional bail to be sentenced at the same court.