Contractor Farrans and a security specialist have been fined a total of £868,800 after a site guard froze to death on a remote windfarm job in Ayrshire. 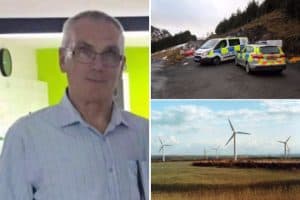 He was found lying face down and hypothermic, in deep snow and died later that day having never regained consciousness.

Corporate Service Management Limited was contracted by Northstone (NI) Limited, who trade as Farrans, to provide security for the site.

Following a site visit by the managing director and operations director of Corporate Service Management, it was agreed that two guards would be required because it was known that mobile phone signals offsite were very poor.

Around lunchtime on 21 January, as forecast, the weather deteriorated resulting in deep drifts on the road to the site from New Cumnock, and the road between the gatehouse where Alexander worked and the site compound where his colleague was stationed.

Although mobile phone communications were known to be poor and inconsistent at the site there was no landline. Two-way radios were available, but these could only be used for the guards to speak with each other and not offsite.

An HSE investigation found that when preparing their emergency weather plan, Northstone (NI) Ltd had failed to include those times when nobody from the company would be present at the site.

The company also failed to ensure there was a back-up generator at either of the guard’s locations to ensure that their welfare area would have heating and lighting should the main generator fail, despite this having occurred on several occasions previously.

Northstone (NI) Ltd did not ensure that Alexander or his colleague had a reliable means of calling for help.

At around 5pm, Alexander’s colleague managed to obtain a signal on his mobile phone and reported to Corporate Service Management’s control room that not only had the generator failed, but that the only means of transporting the men offsite, a 4×4 vehicle, had become trapped in the deep snow at the site compound.

Despite this, Corporate Service Management did not call the emergency services until after 9pm.

Corporate Service Management’s emergency plan relied on there being effective communication between the guards and their control room, however they failed to provide this or to make sure that Northstone (NI) Ltd had provided this at the site.

Northstone (NI) Limited of Belfast pleaded guilty to safety breaches and was fined £768,000.

Speaking after the hearing, HSE inspector Gerard Muir said: “This incident could so easily have been avoided had either company ensured that a suitable assessment had been made of the risk to those working at the site in poor weather, that suitable and sufficient means had been provided for the guards to communicate offsite, and that back-up generators had been provided, particularly when they knew how often the main generator had failed.

“By simply carrying out these correct control measures and ensuring safe working practices at this site, this tragic event could have been avoided.

“Companies should be aware that HSE will not hesitate to take appropriate enforcement action against those that fall below the required standards.”

Northstone (NI) Limited said in a statement: “Northstone accepts that on this occasion at Afton Windfarm we did not meet the high health and safety standards that we seek to achieve to protect our employees, customers, clients, subcontractors and communities.”

“We deeply regret that this resulted in the death of Mr Ronald Alexander. Our thoughts and sincerest sympathies remain with his family and friends.

“We took immediate action on the Afton Windfarm project to prevent a re-occurrence. As part of our internal investigation and the subsequent findings of this investigation we have reviewed and improved our risk control processes across the business.”