A shoplifter who punched a security guard in the face causing him to lose two front teeth from his bottom jaw has been jailed. 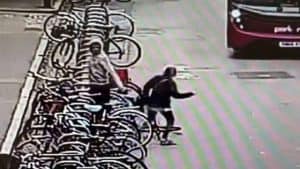 Blake Healy of Willow Walk, Cambridge, assaulted the guard who had followed him to Hobson’s Passage after stealing alcohol from a city centre supermarket on January 6.

The 25-year-old was arrested at the scene and the guard, along with other supermarket staff, highlighted a number of thefts he had recently committed.

At Cambridge Magistrates’ Court on January 7, Healy pleaded guilty to four counts of theft between January 3-6 from stores in Sidney Street.

He also pleaded guilty to common assault of a Sainsbury’s employee and actual bodily harm (ABH) of the guard from Marks and Spencer.

He was sentenced to 26 weeks in prison for the common assault and a previously suspended four-month sentence was activated.

Detective Constable Jess Day said: “As well as causing financial loss to businesses, shoplifters like Healy can often be threatening and abusive to shop workers.

“We hope this sentence will provide some respite to businesses in the city.”