Kevin Heggarty, 26, was spotted on CCTV after helping himself in the food hall, while it was still based at the Paisley Centre. 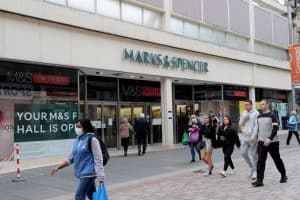 A desperate thief who stashed two large Marks and Spencer gammon joints up his jumper was caught red-handed by security guards.

Kevin Heggarty, 26, was spotted on CCTV after helping himself in the food hall, while it was still based at the Paisley Centre.

Paisley Sheriff Court heard Heggarty was attempting to leg it with £40 worth of meat when he was collared on November 9 last year.

Procurator fiscal depute Caitlin O’Hare told the court : “A witness who was in the control centre at the Paisley Centre monitoring the CCTV system saw the accused.

“He was leaving and he appeared to have stuffed items up his top.

“The accused then made his way out of the shop when he was stopped.

“Security officers found gammon joints on him when they stopped him.

The prosecutor said he was also arrested – staggering around under the influence of drugs – on April 25 last year.

She said: “Police on mobile patrol observed the accused on Wellmeadow Street, Paisley, and he appeared to be under the influence.

“They stopped to speak to him and noticed his eyes were glazed and his speech was slurred, but he did not smell of alcohol.

“He was searched under Misuse of Drugs Act powers and during that search 1.2 grams of heroin was recovered.”

Heggarty, of Blackstoun Oval in the town, pleaded guilty to a charge of shoplifting and admitted a second charge of possession of Class-A drugs.

He told how Heggarty had spent four days in a coma in March this year after taking Class-A drugs.

He said: “This was a wake-up call for Mr Heggarty.

Sheriff Tom McCartney showed leniency to Heggarty but counselled him against falling back into his old ways.

He said: “You are voluntarily seeking help in tackling your addiction and are now drug free.

“Clearly, any reverse into drug use would be dangerous to your health and you will probably realise that.”