A motorist has driven ‘irresponsibly’ at and struck a security guard at a popular Worcestershire shopping centre in an alleged road rage incident. 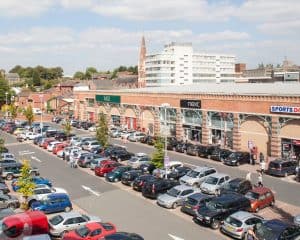 The car driver is said to have driven at and made contact with one of the guards at Weavers Wharf Shopping Centre in Kidderminster on Saturday (February 20).

The centre said it has had ‘excessive queues’ at peak times including weekends during the third lockdown. And drivers have then taken out their frustrations on the security team being abusive, driving the wrong way around the car park to leave at the entrance risking accidents.

They have also been ‘driving at’ security guards, which the centre said resulted in one of them being hit and left ‘shook-up’.

The centre claims it is customers, Uber drivers and even its tenant’s staff, who have given verbal abuse to its staff, with queuing occurring at peak times at the venue. And

In a statement posted on the Weavers Wharf Shopping Centre Facebook page it said: “We are aware that there are excessive queues to the car park on certain days, at peak times. We are using the CCTV to monitor this so we can get an accurate understanding of actual queue times.

“Unfortunately the guards have experienced verbal abuse from customers, Uber drivers and tenant’s staff, including people driving at them whilst they are preforming their duties and driving the wrong way around the car park so they can leave via the entrance which could cause an accident.

“This irresponsible behaviour resulted in a car making contact with one of the guards on Saturday 20th February 2021, the guard was shook-up but physically OK.”

While the Weavers Wharf security team have been trying to manage the queues, the centre says it is the responsibility of the tenants at the site to manage their customers and queues.

It said if its staff were ‘continually put at risk and receive abuse’ it would have ‘no choice but to withdraw them from their car park management duties’.

It conceded the queues were ‘excessive’ and has come up with a plan to divert McDonald’s drive thru traffic, around its car park to try and stop a bottle neck at the car park entrance.

It said: “When there are excessive queues at the weekend, the traffic for the McDonald’s drive thru, will be diverted through the car park to the back exit lane, leaving the first exit lane for retail customers to use to exit the car park.

“We do occasionally experience high volumes of traffic on the back lane so customers may be delayed leaving the car park. There is temporary signage around the car park directing McDonald’s customers, as well as two guards assisting.

“However, it is the best we can come up with in the short-term. Hopefully, when the retail & leisure industry stabilises, we can look at a long-term solution to the problem but at the moment completing major works to the only entrance and exit to the site would cause significantly more problems.

“Thank you for your help in this matter and continued support, it is greatly appreciated!”

Popular Swindon doorman Nigel Skinner dies at the age of 50