A security guard based at Glasgow Royal Infirmary has raised more than £1,000 for charity after shaving off the beard he grew for a year during lockdown. 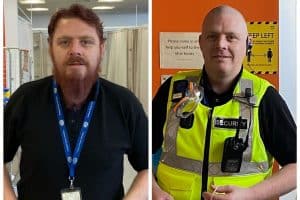 In a bid to reach his target, Thomas Ellis decided to shave off not only his beard, but his full head of hair too.

Since the loss of his brother-in-law and grandad to cancer, Thomas, 39, has been a regular charity fundraiser, often taking part in the Beatson Walk to raise money for the cancer service.

However the security guard, who has worked at the Infirmary for 18 years, has had to get creative about his fundraising during lockdown.

Both his whiskers and locks recently came off after friends and colleagues helped him to raise so much cash.

Thomas, whose sons say he looked like a Glaswegian version of Thor, said: “I want to thank everyone who has donated, not least my fantastic colleagues at the GRI who have been so generous in raising funds for Macmillan. The Macmillan teams have been doing so much to support people who have been impacted by cancer or loss throughout the pandemic and it’s nice to give something back.

“It’s been a long – and often itchy – journey over the last year and now I look more like an Easter egg than a Viking god! I’m definitely relieved to have the beard off, but not quite as much as my wife, Linsey. She’s told me to never do it again!”

“Our Cancer Information and NHS bereavement support team at the Glasgow Royal Infirmary have been a huge support to families and loved one who have lost someone over the course of the last year and the team continues to help all those who are encountering loss or going through their cancer journey.

“Every donation helps us to continue our work and we wish Thomas well with his big shave off.”

A Bradford man was convicted of working illegally without a licence