A Derbyshire dad was told by a judge he “needs to be setting a far better example” to his young daughter as he was sentenced for biting a doorman’s ear in front of her after being kicked out of a pub. Paul Holmes visited The Burlington pub, in Chesterfield, on the afternoon of Saturday, September 4, last year with his daughter, but became increasingly loud and aggressive towards 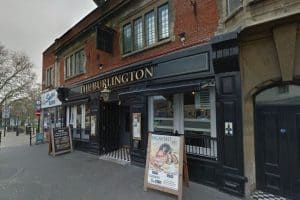 customers and door staff were told not to let him back in after he went outside to make a phone call.

Prosecutor Nicola Patten told Derby Crown Court that Holmes was told he could not re-enter, but wanted to ensure his daughter – who was still inside the pub – was safe. But after his daughter had come outside, he leant his head into the shoulder of the doorman, put his right arm around his shoulder and bit his left ear forcefully enough to pierce the skin.

CCTV was shown to the court of the attack, for which Holmes, 50, was arrested later that day and the victim had to attend hospital. Despite telling police he acted in self-defence after feeling threatened by the doorman, he later gave no comment once he had been shown the CCTV footage and pleaded guilty to one count of assault occasioning actual bodily harm at Chesterfield Justice Centre on March 24 this year.

Reading a victim impact statement written by the doorman, Ms Patten said: “This has caused a significant amount of distress. He [Holmes] did not make any indication that he might hurt me. I have never had an incident as serious as this. I could trust regulars and patrons to behave in a civil manner. I was shocked. It was an immoral thing to do.”

Holmes, of Chepstow Close, Chesterfield, has a host of previous convictions including nine for offences against a person, including grievous bodily harm. He is currently on leave from his job as an asbestos remover.

Lucia Harrington, mitigating, said: “It was a short-lived incident, over very quickly, one that did not descend into further violence. The complainant has not suffered a permanent injury or any disfigurement. This was a single bite, not repeated bites.

“The court will no doubt be concerned that after a time of imprisonment we come to another offence of violence. There are clearly issues with Mr Holmes’ thinking and custody has not addressed that issue. I ask the court to give him a chance to face head on the problematic approach he takes to situations and deal with it so these things don’t keep happening.”

Recorder Dean Crowe, sentencing, said: “Even after your daughter had been allowed out, you resorted to violence. You gave the impression of wanting to speak to the victim but instead used that as an opportunity to bite his ear. You claimed, wholly incorrectly, that you were acting in self defence.

“I accept that this was an impulsive, short-lived assault. You are clearly a committed father. Having considered all of the circumstances, the custody threshold is crossed, but there is a realistic chance of rehabilitation. You need to be setting a far better example for your daughter.”

Holmes was handed a six-month sentence, suspended for 12 months. He must complete 90 days of alcohol abstinence monitoring and 20 rehabilitation activity requirement days, and pay a £128 victim surcharge.