The 36-year-old showed a rare lack of accuracy during shooting drills ahead of the game. 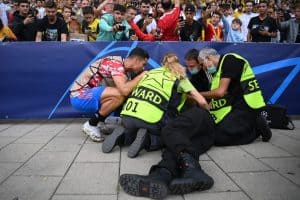 Cristiano Ronaldo is wasting no time making an impact at Manchester United, though made the wrong type of impression on a security guard ahead of Tuesday’s game against Young Boys.

The 36-year-old is back at United after 12 years away, completing a remarkable return during the final days of the transfer window.

Ronaldo on Saturday made his second debut for the club against Newcastle, scoring twice in a relatively comfortable 4-1 win to re-introduce himself at Old Trafford.

He was back in the starting line-up on Tuesday as United kicked off their Champions League campaign in Berne against Young Boys, and in doing so matched Iker Casillas’ competition record.

Not content with being the all-time Champions League top scorer with 135 goals, Ronaldo has now made 177 appearances in the competition – matching his former Real Madrid team-mate.

He marked the occasion with the opening goal, slotting Bruno Fernandes’s pass through the goalkeeper’s legs.

It was better accuracy than before the game, when a wayward shot floored a security guard patrolling the edge of the pitch.

Ronaldo was quick to rush over to check on the man and apologise.