Guardian Angel was founded upon, to quote their company website, “a core belief that personal lighting technology will make the world a safer place”.

This seems reasonable enough to us. We’ve written at length on the importance of items such as high-vis vests, quality handheld torches and many other, light-emitting security devices.

Good lighting is certainly important to security work. For one, troublemakers tend to avoid bright, well-lit areas. Good lighting can also mean the difference between seeing a suspect’s face or not. For a third, but by no means final point, a portable light source is essential for anybody working outdoors at night.

Their products are used by a wide variety of people, including police officers, security operatives, and anybody working at night or in low light. Guardian Angel Lights have even been touted as being good hurricane preparedness equipment.

The Guardian Angel Elite series is easy to carry around and 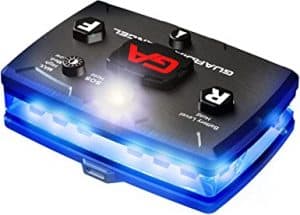 wear, weighing just over 92 grams (3.25 ounces). This means that it can be worn for extended periods without feeling too heavy. Body-worn equipment is sometimes heavy and cumbersome, but not this time. The Micro series is even lighter, but despite being larger, its counterpart is still compact and portable.

The Elite series features 18 very bright LED lights, which offer the user not only great light coverage, but also a high degree of functionality. The lights can create different patterns and perform different functions (such as an ‘S.O.S’ mode, infrared mode, or various flashing patterns).

Other functions include ‘stealth mode’ (which is a single red light, not very bright) and ‘enhanced mode’ (where 4 bright, white lights are used for a ‘hands free’ feature – excellent for night work), but these are by no means all there is.

These lights can also display some 25 different colours (including white, red, orange, blue, green, and yellow). Users can illuminate all LEDs at the same time, or simply select one area to light up. The sheer number of options available to the user is very impressive.

The LEDs can put out as many as 800 lumens, although this is also adjustable. The four main brightness settings are low, medium, high and max. This is good, because you don’t want super-bright lights all the time for one thing and, for another, lower brightness settings help to conserve battery power (although the battery life is very good).

At its brightest mode (max), the light can be seen for up to 8 kilometres (5 miles) away, which could be great in emergencies. This function makes the Elite series body-worn light excellent for night workers, but also highly recommended for hikers, drivers, cyclists, construction workers and first responders of any kind.

The light is also very well-designed and durable. The casing is fashioned from hard-wearing polycarbonate, ABS, rubber, which is the toughest material possible for a product like this. 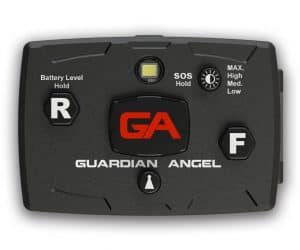 The Elite Series feels solid and secure when held and boasts an IP rating of 68, which makes it able to withstand most weather conditions, making it perfect for outdoor use at any time of year. It can even be submerged in water and survive.

The light is shock-proof as well, meaning that it can be dropped onto a hard surface and still work. This high resiliency means that, if it ever does fall off (or, more likely, is pulled off), the lights will be unlikely to sustain any lasting damage. It’s rare to find something so lightweight that is also solid and strong.

The lights attach via neodymium, iron, and boron NB42 magnets. These are basically the strongest around and they ensure a secure fit. The magnetic base mount is included with the main light and has a soft, padded underside that allows it to be worn comfortably.

The Micro Series, by contrast, is slightly more limited than 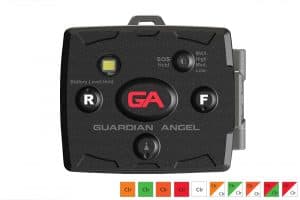 the Elite. However, it is still a brilliant device. Weighing in at just over 56 grams (2 ounces) and being smaller even than its palm-sized cousin makes this device very useful for covert work.

For the most part, the Micro Series boasts most of the same features as the Elite Series. It has the same tough, durable polycarbonate outer casing, the same shock proofing, IP rating and ridiculously strong NB42 magnetic mounts. However, the lights aren’t quite as bright (being visible from 4.8 kilometres, or 3 miles away) and it does offer fewer functions.

The Micro series features 11 LEDs capable of displaying 11 colours (including red, yellow, orange, and white). This is not as many as the Elite Series, of course, but it should more than cover the needs of most users.

The battery, which lasts for 50 hours, is also excellent.

If you don’t want to draw attention to yourself, are on a budget, or you have no need for 800 lumens worth of light, then the Micro Series may present you with a better option. It doesn’t do quite as much as the Elite Series, but it still does more than enough. 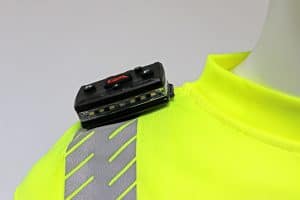 of visibility. Responding to an emergency, for example, is a very difficult thing to do in the dark. Good quality, reliable lights help security operatives and door supervisors to deter would-be troublemakers, identify potential suspects and make themselves more visible to passers-by, onlookers, and oncoming vehicles.

Lights can provide a way of calling for help, or simply advertising a security operative’s presence. Hand-held torches can be (and are), used for all of these purposes and more, but a body-mounted light allows the user to go ‘’hands free’, enabling them to do things like apply first aid, restrain a violent person, or contact the relevant authorities.

For these reasons and more, a quality body-mounted light, with adjustable settings, variable brightness levels and a lightweight, yet resilient design, is a great option for any security operative, especially those who work outside and at night.

Body-worn lights are also a good option for security workers who guard spaces such as warehouses and industrial estates or who regularly patrol residential areas or other properties.

“The first thing that struck me was how easy to use both the ‘Elite’ and ‘Micro’ versions are. As a test, I unboxed the Elite version and began to use it without looking at the instructions, while my fiancée opened the Micro version and carefully read the instructions. Despite our different approaches, we both found the devices equally easy to navigate and operate.

Both devices benefit from a highly ergonomic design. I found that I enjoyed the tactile sensation of both holding and using them. The Micro is small enough as to be about the same size as a ‘Fidget Cube’, while the Elite fit perfectly in the palm of my hand. Neither is excessively bulky or heavy, so it’s hard to imagine experiencing any discomfort from them, even over long-term use.

When activated, the lights are very bright. Guardian Angel’s website proudly states that they can be seen from 5 miles away – and I can certainly believe that! The brightness is adjustable, but these guys come out swinging, with very clear, bright LED bulbs that are, it must be said, quite a lot to deal with in an enclosed space!

The lights have an impressive array of functions, including multiple colours and patterns, as well as the ability to shine in almost any direction.

Everything is customisable and can be accessed at the touch of a button. It’s excellent to have so many options, but not to be inundated by them because the product is so very user-friendly. The buttons are easy to reach, and the control options are logically laid out and easy to fathom. The ‘S.O.S’ function particularly impressed me because it blinked in morse code.

Perhaps the most immediately impressive aspect of these lights, aside, of course, from the lights themselves, was the super-strong magnets that attach them to clothing. Those things are amazing!

Sometimes, a product that uses magnetic attachments can be a bit of a gamble. You use it fine when it first arrives, but you can see it falling off when being used regularly and roughly. Not so these magnets.

I attached the Elite light to my shirt, using just the magnetic attachments, and moved around. I found that the light stayed in place no matter what I did. It didn’t even bounce around as much as I was expecting. I also tried pulling it loose, (the way an assailant might) and found that, while it could be pulled off, the assailant would have to be making a concerted effort to remove it. It was highly unlikely to fall off by itself or be accidentally removed in any way.

The other clip mounts were also very well designed. I tested the universal mount, the epaulette mount, and the strap mount. My personal favourite was the strap-mount, which opens enough to be placed on a thin backpack strap or any other strap, whereupon the light may be mounted. Not only was this as sleek and well-designed as the rest of the products, it also featured a small, removable Alan key tucked away inside the mount that can be used to loosen or tighten the mount itself.

The universal mount was my least favourite, mainly because the metal clip that allows it to be attached to belts and pockets was very rigid and inflexible. It was very difficult to slide it over anything and it didn’t have much give to it. On the plus side, this will probably serve it well for activities such as running and walking for long distances, but it was nevertheless quite difficult to get on.

Each mount was excellent, however. They all feel sturdy and reliable.

The attention to detail here is simply staggering, from the clear, easy-to-read battery display to the welcome inclusion of a USB charger (the Micro version doesn’t have one, sadly) and the overall durability of the devices themselves (I neither dropped them, nor immersed them in water, but I feel confident that I could have done both and they would have survived).

Indeed, these lights really feel like products that have been designed with field use, practicality, and user-friendliness firmly in mind. Brilliant”

Guardian Angel lights, both the Elite and Micro Series, represent quite a significant shift in the development of body-worn lighting. They are preferable in many circumstances to head torches, or even hand-held torches and they are magnificently well designed and thought out in every aspect.

The lights are bright and very high quality, the battery life is very good, and the overall feel is that of a wholly reliable product designed by people who really knew what they were doing.

Both lights feature a dizzying array of features and functions yet are still very easy to operate and use. The light, ergonomic design belies a tough, supremely resilient outer casing that feels almost indestructible, while the Micro Series feels perfectly suited to covert work.

Both sets of lights would be of great use to any security operative, but particularly those who work outside, at night or in otherwise risky situations.

We were very impressed by these lights, their functionality, design, user-friendliness, and overall usefulness has yet to be matched. We happily and heartily recommend them to any security operative who feels that they may be of use.

You can buy either of the Guardian Angel Elite Series or Guardian Angel Micro Series on the link below, We were given both of these products to review by the manufacturers, but our reviews are genuine and what we really thought of the product.