A racist dad of seven was thrown out of Pontins after hurling horrific abuse at a security guard. 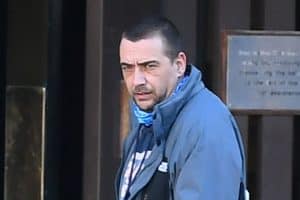 The 41-year-old then got one of his young children and began pointing and laughing at Mr Ashby, saying “monkey”.

Brettle appeared at Liverpool Magistrates’ Court this afternoon where he admitted using racial language but denied some of the alleged comments.

Andrew Page, prosecuting, explained that Mr Ashby was working as a security guard at Pontins on Shore Road in Southport on August 21 last year.

Mr Page told the court he was on patrol at the family holiday camp when he was alerted to a man “being abusive to customers” and “disturbing the bingo”.

The court heard he was wearing a full blue tracksuit and black trainers as the security guard approached him and asked him to accompany him outside.

Mr Page explained that nearby tables were filled with families and children.

He said: “Mr Ashby tried to get him to come with him, he still refused, being very aggressive.

“Mr Ashby had to forcibly remove him by the arm and took him to the front gate.

“He told him to calm down and told him he could then rejoin his family.”

As soon as Mr Ashby released Brettle he threatened he would “come back with a hammer” hurling abuse including “n*****” and “black c***” at the security guard.

Brettle also called his victim a “diseased monkey” while pointing at him.

When his partner came outside Brettle “picked up a small boy, his son, and shouted and pointed ‘monkey'” after which he continued to make threats.

Brettle was interviewed in which he explained he was on holiday with “extended family and his three year old son”.

He told officers he had drunk three pints of beer when an argument over his son began when someone told him to “shut the kid up”.

He denied that he was aggressive or swore and said he didn’t use any of the racist language.

Mr Page explained that Brettle had suffered a panic attack and after being discharged from hospital “wanted to say sorry”.

In a victim impact statement Mr Ashby said: “I am a person of mixed heritage and I have lived in Merseyside all my life. I was subjected to vile racist comments.”

Mr Ashby said: “I was upset but I had to get on with my job.

“I’ve never been racially abused in my private life or while employed at Pontins.

“I was left feeling degraded and extremely angry.

“How can this person be so offensive to another individual? It’s the 21st Century. I can’t believe this male thought it was alright.

“What a great example he is for his young family. Personally I have never been so degraded by the actions of another man.”

Brettle has 19 convictions for 48 offences the last of which was in 2019 when he was convicted for production of cannabis and received a financial penalty.

The court heard he had not had any other convictions since 2008, before which offences included burglary and shoplifting.

Patrick O’Hanlon, defending, explained that in a report prepared for the court in which Brettle spoke to the probation service, he denied some of the comments but “what he doesn’t shy away is that racial language was used”.

“What he’s keen to advance is this is no reflection of him as a person in terms of any beliefs he holds.”

Mr O’Hanlon said that as it took place in a holiday camp it “could have been in earshot of many more people” but was heard only by the victim and his assistant although the judge confirmed “there were people coming and going”.

He told the court that Brettle was with his two young sons at the time adding “that’s no example to set for anyone”.

District Judge Paul Healey, sentencing, said: “Your behaviour was so unpleasant they made the decision you had to be thrown out of the holiday camp.

“You subjected a security officer to really horrible racist abuse.”

He added that the behaviour left his victim “upset” and “astonished”.

The district judge said: “I did consider sending you to custody straight away today but I feel I can step back from immediate custody.”

District Judge Healey said he took into account Brettle’s guilty plea, and said it was “significant” that since 2008 Brettle has had only one previous conviction.

Clacton doorman who was drugged weighs in on Colchester Spikings