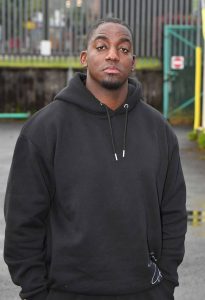 A doorman who faced racist abuse from a city clubber has insisted ‘people should not get away with this’ – and only through zero tolerance will the world be better in future.

Tristan Price, an uncle, said he does not want his nieces and nephews to grow up facing the type of hateful comments that he had faced.

And, when asked if he thought a face to face meeting with his abuser would be useful, said: “I doubt it.”

Mr Price, 26, has been widely praised for his professionalism as he faced abuse from Sharne Walker, 25, while working at the Figure of Eight pub in Broad Street in May.

A video of the incident, showing him facing a racist tirade from Walker, went viral. It has been viewed more than three million times.

He said at the time of the attack: “I don’t want to bring trouble to her door but this behaviour needs to be called out. It is completely unacceptable. People have killed themselves because of the racial abuse they suffer, and we can’t be silent about it.”

She pleaded guilty to racially aggravated assault in connection with the incident.

Mr Price spoke to Birmingham Live after reflecting on news that the case had been heard in court. “This type of behaviour has to be called out and stamped out. There is no soft way to do it, we have to go hard on this.

“I am a nice person and like to see everyone happy, I don’t want to bring trouble to anyone, but people have to be held responsible for their actions.”

Mr Price added: “I am in a good place personally, and have put this behind me, but it’s just not right. I have got young nephews and nieces and would hate for them to have to navigate this when they are older.”

“It is up to me and our generation to make sure that when they get into the adult world this is just not happening. They shouldn’t grow up having to face this.”

When asked if he would consider a ‘restorative justice’ meeting, whereby he would have the chance to meet with his attacker face to face, he said: “To be honest I cannot think of anything I would want to say to her. I don’t think anything I could say would make much difference.

“I am a forgiving person but I cannot see myself sitting with her.”

She said: “Abuse or violence against people based upon the colour of their skin is totally unacceptable and they should be dealt with firmly by the police and the criminal justice system.

She added: “The, soon to be published, Police and Crime Plan will set out hate crime as a priority for the PCC and West Midlands Police. It will detail what more needs to be done to ensure the people of our region are protected and supported when they need us most.

“Nobody should be subjected to abuse because of who they are. Birmingham is proud to be a diverse city and abuse will not be tolerated under any circumstances.”

Sharne Walker, 25, of Woodhouse Close in Worcester, appeared at Birmingham Magistrates Court last week. She pleaded guilty to racially aggravated assault and causing damage to the glass in a door at the pub during the incident.

The opening of the case was adjourned as the court heard medical reports needed to be prepared for Walker ahead of sentencing.

Her defence solicitor, Judith Kenney, said she understood the offences could end in prison for the woman – but outlined hopes for a suspended jail term.