Pubs in England could reopen as early as June 22 as the Prime Minister rushes to save around 3,500,000 jobs. 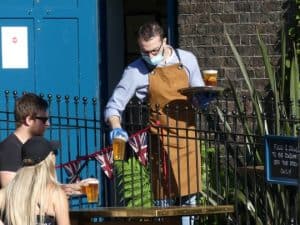 Over the weekend it was reported that Boris Johnson is striving to get the country back to normal by July, after Business Secretary Alok Sharma warned that lockdown restrictions could cause a ‘jobs bloodbath’ for the hospitality sector.

In response, he created a group of ministers, branded the ‘Save Summer Six’, whose mission is to get the economy up and running again within the next month. At present, pubs, bars and restaurants are not due to reopen until at least July 4, but many have been continuing to serve takeaway amid the pandemic.

The ministers, including Chancellor Rishi Sunak, are now reportedly aiming for for pubs, restaurants and bars to reopen by June 22. Whitehall sources have confirmed the date is in the works, The Financial Times reports.

The hospitality industry has been hard hit by the coronavirus pandemic, with Johnson previously urging people to avoid eating out on March 16.

The country was then put into lockdown just one week later. Since then, restaurants and bars have been installing see-through curtains, air purifiers and clear plexiglass screens in a bid to protect customers and staff when they do reopen.

Trade association UK Hospitality have argued that current social distancing measures will make it hard for businesses to make a profit. Under current rules, people must keep at least two-metres away from anyone that does not live in their household, meaning restaurants will have to restrict their capacity.

This differs from World Health Organisation (WHO) guidance, which says people should maintain one metre distance between themselves and others. The PM is likely to scrap the two-metre rule in the coming weeks.

In May, Johnson told the Commons Liaison Committee that scientists are now reviewing the social distancing guidance. He said: ‘On hospitality… we are really trying to go as fast as we can. ‘It is really difficult to bring forward hospitality measures in a way that involves social distancing. But I am much more optimistic about that than I was. We may be able to do things faster than I previously thought.’