A Post Office security guard was left “extremely shaken” after masked thugs threatened him with a hammer before taking the cash box he was carrying. 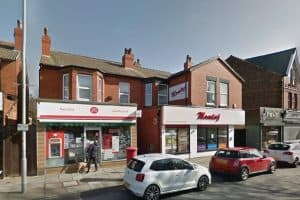 The distressing robbery happened outside the Post Office on College Road in Crosby yesterday afternoon (Tuesday 2).

Just after midday, three men with their faces covered and black clothing confronted the guard on the street outside while he was transporting the cash box.

They threatened him with a hammer and snatched the box before speeding off in a white Audi which appeared to have damage to its front.

Unfortunately for the armed thugs, they discovered the cash box was empty after attempting to break into it on Coronation Drive.

One eye-witness described seeing three men pull up in a car outside before attempting to “smash open” the cash box.

Police soon after cordoned off the area on the street where the men tried to destroy the box.

Officers said staff and customers were left “extremely shaken” but unhurt during the terrifying incident.

CCTV, forensic and witness enquiries are ongoing, and detectives said they would like to hear from anyone who can help in the investigation.

“It’s hard to believe someone would be cowardly enough to confront them in such a distressing way, and we will do all we can to find those who did and put them before the courts.”