A police investigation into a bouncer who was filmed allegedly assaulting a man outside of a Darlington venue has been dropped. 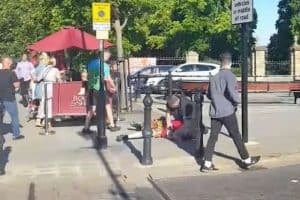 The footage, which was shot outside of the Boot and Shoe hotel in June, shows a doorman seemingly taking a swing at a man before wrestling him to the ground in Church Row, Darlington.

The venue previously told our sister title, ChronicleLive, that it had “removed” the doorman after the clip came to light while the Security Industry Authority – which regulates bouncers – suspended his licence.

Durham Constabulary interviewed a male in connection with the incident on June 12, although TeessideLive understands no arrests have been made, and the force has now closed its investigation.

Now Darlington Council, which was also made aware of the incident, has confirmed no action will be taken against the premises.

A spokeswoman said: “We understand the police investigation has now concluded.

“From the council’s licensing perspective, the venue fully cooperated with the investigation and we will not be taking any further action against the premises.

“Incidents relating to a licensed doorstaff can be reported to the Security Industry Authority (SIA).”

The latest update from the SIA – which regulates bouncers – confirmed his licence was suspended and remains in jeopardy.

In August the watchdog confirmed that, almost two months on from the incident, the doorman was still unable to work – and that the clock was running out should he choose to contest the ruling.

“The person in question is still under suspension, and we have told them that we are minded to revoke their licence,” said an SIA spokesperson on August 4.

“They are still within the time period when they can appeal against the suspension, but they are not able legally to work.

“It appears that the licence-holder has not yet lodged an appeal. Without a successful appeal, the revocation of their licence is inevitable at the end of the appeal period.”

TeessideLive has contacted the SIA for a further update.