A pub drinker stabbed a doorman three times in the back with a knife – leaving him fearing he would die. 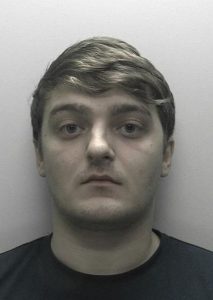 Liam Williams, aged 25, left the bouncer bleeding heavily after starting trouble at the Jolly Miller in Estover, a court heard.

He suddenly pulled a blade from his hoodie and stabbed him three times in his lower back outside the pub.

Victim Craig Pearce had earlier pulled Williams away as he launched another unprovoked attack by grabbing another customer around the neck.

He later told the police: “I have been struggling to sleep at night. I keep playing the incident in my head and how I thought I was going to die.”

Jailing Williams for five and a half years at Plymouth Crown Court, a judge said he was “looking for trouble” that night.

Judge William Mousley told the defendant: “You took out a knife and stabbed him three times in the lower back. You then ran off.

“Mr Pearce did not realise, as is often the case, that he had been stabbed, but he soon realised that must have happened due to the heavy loss of blood.”

Judge Mousley said that Mr Pearce was taken to hospital, where the wound was cleaned and packed. He was discharged three days later.

He also admitted the common assault of Charlie King by beating earlier that Friday night.

Nigel Wraith, for the Crown Prosecution Service, said Mr King was at the pub with his family.

He added that he was in the outside seating area with his mother when Williams, accompanied by a male friend, started talking to him.

Mr Wraith said the defendant asked if he wanted to “play a game” or “come and speak to me.”

He added that when Mr King refused, Williams swore and called him a coward.

The barrister said that the victim stood up and took a couple of steps forward, but Williams rushed at him, punching him to the back of the head and grabbing him around the throat.

The court heard that Mr King said that he could not breathe.

Mr Wraith said that Mr Pearce came out of the pub and restrained Williams. The barrister said he was in uniform but did not have a licence for security at that moment because he was awaiting its renewal.

He added that Mr Pearce was there to assess a new doorman.

Mr Wraith said Mr Pearce told Williams he had to leave but the defendant’s friend was allowed to go back into the pub to fetch a mobile phone.

The barrister said that the defendant seemed to calm down.

He added: “Mr Pearce turned his back on Williams and his friend. At that stage, Williams reached into his hoodie pocket, produced a knife and stabbed him three times to the lower back in quick succession, before making off from the pub in haste.

“He genuinely thought he was going to die because of the loss of blood.”

Mr Wraith read part of a statement from Mr Pearce, who said that he had never felt the same in five years of working on doors.

The victim said: “This incident has affected me greatly. I cannot go out by myself because I fear that someone is behind me.

“I struggle to sleep because I keep replaying the incident in my head, thinking I was going to die. I used to be a happy chappy but now I only want to stay safe.”

The defendant was at first arrested on suspicion of attempted murder.

Ali Rafati, for Williams, said his client had no previous convictions involving violence nor weapons.

He added that the defendant was under the influence of drink at the time.

Mr Rafati said: “He is thoroughly disgusted and ashamed of himself and wants me to repeat that to the court.”

Mr Rafati said: “The best I have for Mr Williams which he can put forward as an explanation, as a man never been in this situation before, is that he suddenly became very anxious and overwhelmed and totally misjudged the situation on the night”.

He said that the defendant has been “relatively reclusive” as he cared for his ailing mother.

Mr Rafati said that Williams had a bricklaying qualification but that his responsibilities to both his parents had not allowed him to work.

Man Glasses Doorman in the face leaving him to get surgery, is jailed for 15 months