Over £7,000 has been raised, and loving of tributes have been left in memory of a popular Lincoln doorman who sadly died last week. 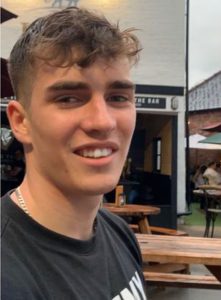 Sean Darwood, 20, passed away peacefully in his sleep on Friday, January 7 according to his colleague Jay Hilton who set up a GoFundMe page to give the University of Lincoln student the “send off and respect he deserves”.

Lincolnshire Police said the sudden death on Yarborough Road was reported to them at 2.14pm on January 7 and is not being treated as suspicious. Police added that the incident has now been passed to the coroner.

Sean’s fellow door staff issued a tribute to The Lincolnite saying: “We are saddened to hear of the passing of one our colleagues, he was such a legend and was one of the lads. He will be missed and we send our condolences to his close family and friends. RIP Sean.”

A GoFundMe page set up by Sean’s colleague Jay has raised £7,100 from over 400 donations by the time of publication – make a donation here.

On the fundraising page, Jay said: “Sean was a brother, a son, and an amazing human being. Sean had ambition and was always at the heart of people’s happiness. I can never remember a moment when Sean wasn’t smiling.

“We are all going to miss him dearly but we know he is now peace. I recently remember Sean telling me he was the happiest he had ever been and at this point in life he had his resolve. Rest in peace always Sean Darwood, I love you forever.”

Stephanie Chathley was among those to donate to the fundraiser and she said: “We were heartbroken to hear of Sean’s passing. He was in our home many times with my son James and I thought he was one of the loveliest young men.

“He always went out of his way to say hello, was always polite, was always smiling. Such a sad occasion. Praying for his family and friends.”

Amy Mackleworth said: “Sean was the light of every room. He made me laugh constantly and acted as my support system at a time where I was really struggling.

“We spent three months basically living and spending almost every moment together last year and he was my only motivation. Even if we didn’t see each other much in the past few months.

“I loved him so much & will miss seeing his smile round every corner on nights out and getting hugs. Truly heartbroken.”

JoJo Geraghty said: “Sean will be dearly missed, not only by myself but all of his friends and family. He was such a genuine and kind hearted soul.

“His smile would light up any room and he always managed to make me laugh when I was upset. He has been taken far too early. Rest in peace Sean, you’ll forever be in our hearts.”