A dad-of-three who “lived and breathed for his family” has died suddenly. 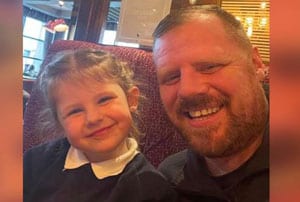 Gary Marsh was at his home in Anfield when he suffered from a suspected heart attack on April 27, hours before he was due to go to work. Despite the best efforts of his family and paramedics who acted quickly and gave him CPR, Gary tragically died.

The 41-year-old, who worked as a doorman at The Grapes on Mathew Street, was described as “a true gentleman” by his best friend Don Kininmonth. He leaves behind his partner Emma Manning, 30, and his children Jack, 13, Megan, ten, and Grace, four.

On the day Gary died, Don, 43, said: “He was at home, he was a smoker, he went outside for a smoke. He’d come back into the house and basically started coughing and couldn’t catch his breath.”

Don said Gary’s sister-in-law gave him CPR while his partner rang an ambulance which arrived within minutes. He added: “As I said they worked on him for over 90 minutes to try and bring him back but unfortunately he’d already gone.”

The family are waiting for the results of a post mortem to determined how Gary died but it is believed he had suffered from a heart attack. Don has now set up a Gofundme page in Gary’s memory, to support his family who “he adored so much”.

Don said he is overwhelmed with the response they have received to the fundraising page so far which has raised over £2,300. A series of floral tributes, candles, balloons and photographs have been left on Mathew Street where Gary worked.

Paying tribute, Don said: “Everyone loved Gary because he was the first one to make you laugh, he was always one for a bit of fun. He was the type of person who would give you the last penny out of his pocket.

“He lived and breathed for his family. I really wanted to try and do what I can for my friend because I know my friend would have done the same if the shoe was on the other foot.”

In a message on the fundraising page, Don said: “Gary was one in a million, a true gentleman with a heart of gold! Let’s give this man the send off he deserves and hopefully something to his beautiful family who he adored so much. Goodnight big man love you brother.”

Man seen throwing punches at people in Carlisle told a doorman who tried to restrain him: “I’ll get you slashed.”