A Door Supervisor at Nottingham’s Ocean nightclub has been sacked after a video emerged online appearing to show a student punched in the face. 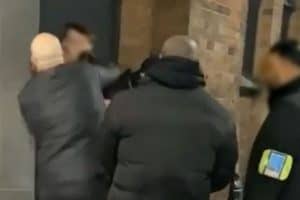 The six second video shows an altercation between two people either in the late hours of Wednesday (March 23) evening or the early hours of Thursday (March 24) morning, with another man trying to come between them.

In the video, a bouncer is seen to punch a customer, thought to be a student, in the face before being ushered away by another man.

Andy Hoe, the owner of the nightclub in Greyfriar Gate, said a bouncer had been fired following the incident.

Based on what he’d been told by a number of people, Mr Hoe said just before the video was filmed the student was “being a nuisance” and tried to get back into the club after leaving. Mr Hoe said the student told him he grabbed the doorman’s SIA badge off his arm, a compulsory security guard licensed.

The incident in the video followed, explained Mr Hoe, with a bouncer dismissed shortly after.

On his Instagram page, Mr Hoe said: “It was dealt with pretty much immediately and the guy was fired. I’ve also spoken directly to the student who said he was also maybe a little in the wrong in the build up to what’s on the video.

“What’s on the video is literally the last few seconds but that doesn’t justify the actions of the doorman whatsoever and he won’t be back at Ocean again. I won’t put up with that kind of stuff.

“I contacted my GM (general manager) and the owner of the security company when I got the video to tell them the response to take. But I didn’t need to, they had already done it. They know what conduct I expect and it definitely wasn’t that.”