A VILLAIN robbed a man out for a summer’s day walk, threatened to smash a security guard’ s face in and was caught with a dagger. 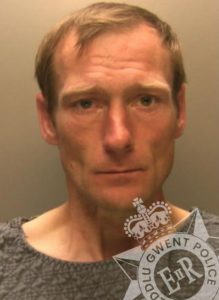 Lee Ball, 38, was jailed after he went on the rampage in Newport, the city’s crown court was told.

The most serious of the offences, prosecutor Thomas Stanway said, was committed when the defendant robbed Zeray Ferge of his £300 bracelet.

Ball was with another man when he attacked his victim near Castle Bingo on Sunday, June 13.

The defendant struck again three days later at the Newport City Council accommodation he was living in on Chepstow Road.

When he was asked to keep the noise down, he threatened a security guard there.

Mr Stanway said: “The defendant told him, ‘I will smash your face in.”

Ball was armed at the time with a bizarre weapon – a skipping rope with a snooker ball attached to it – and a screwdriver.

The third conviction related to him being stopped by police in a car park near Newport Magistrates’ Court and the Probation Service office on April 23.

Mr Stanway said: “Officers found a dagger like knife in a pouch in the defendant’s coat pocket.”

Ball, of Chepstow Road, Newport, pleaded guilty to robbery, affray and possession of a bladed article in public.

The court heard how the defendant has 38 previous convictions for 73 offences.

These include 44 for theft and related offences and four for possession of an offensive weapon.

Stuart John, mitigating, said his client had previously wrestled with a heroin addiction and suffers from anxiety and depression.

He added: “The robbery took place against a man going out for a walk on a summer’s day.

“You also threatened you would smash a security guard’s face in.”

Ball was jailed for 32 months and ordered to pay a £190 victim surcharge following his release from prison.

‘I barely had time to think’ says Doorman that failed to make sure man in ‘chokehold’ could breathe, inquest hears