Banksy’s prolific summer shows no sign of stopping after a mural appeared in an Essex seaside town. 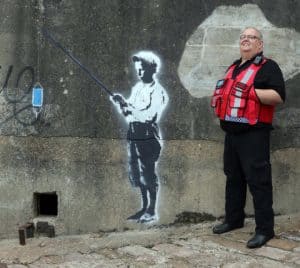 The new work of a boy catching a face mask with a fishing rod emerged in Harwich to the delight of locals.

It has been valued so highly that Tendring District Council ‘immediately’ installed a security guard to protect it from vandalism, with black graffiti already noticeable nearby.

‘His works are provocative, thought-provoking and controversial, but also clever, witty and incredibly creative.

‘We are hugely delighted that he has chosen to come to Harwich and leave us with a reminder of his visit.

‘We immediately put security in place and are taking further steps to protect this artwork as we await confirmation that it is indeed the latest piece of the artist’s “Spraycation” in East Anglia.’

The council’s response is a marked change to that of a Banksy work in nearby Clacton-on-Sea in 2014 ahead of a by-election which Ukip won.

The authority painted over the mural of pigeons holding anti-immigrant banners because it was seen by some as ‘racist’.

The mural on the sea wall at Stone Pier has quickly become the talk of the town.

Social worker Alan Critchley said: ‘Very much hoping that this is a genuine Banksy seen at Harwich today. It’s a very powerful image.’

Another person added: ‘Awesome art in Harwich, unsure whether it is an original Banksy but its message is strong and thought provoking.

‘Hoping it is and many children and young people get inspired by its message!’

The mystery artist is yet to claim ownership of the mural.

Earlier this summer he produced 10 new pieces on his ‘Great British Spraycation’ in seaside towns in Suffolk and Norfolk.

One of the works was a painting of a rat sitting on a deckchair in Lowestoft, but the attraction was covered with white paint by a ‘mindless’ vandal.