Metropolitan Police has responded after a horrifying video emerged on social media of a Wireless Festival security guard “slapping” a woman during a scuffle between the two, see the full story here 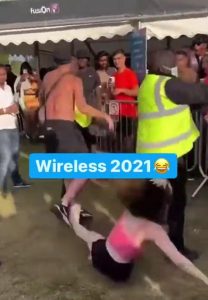 After receiving the reports on Sunday, September 12, festival organisers confirmed to police that the man had been removed from duty.

Further enquiries were then carried out and officers said it was established that the woman involved did not wish to make a formal report to the police.

The footage, which has already been viewed more than 400,000 times on social media, shows the Crystal Palace festival goer with her hands on the security guard.

The security guard drops to his knee before the woman, dressed in a pink top, appears to hold his high-vis jacket and t-shirt in the scuffle.

The pair come face to face for a split-second before the guard appears to slap the woman right across the face.

The spokesperson for the Met Police said: “On Sunday, 12 September police received a third party report of an assault at Wireless Festival in Crystal Palace Park.

“It was reported that a female had been assaulted by a man working as a security guard.

“Officers made contact with the organisers who confirmed that the man had been removed from duty.

“Further enquiries were carried out and it was established that the female involved did not wish to make a formal report to police.”