Masked men are said to have dragged a security guard from his car to beat him before setting fire to a food stall. 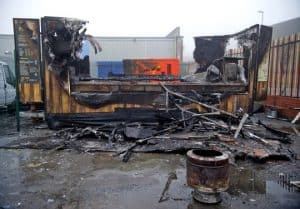 Shocking pictures show the charred remains of Uncle’s Tea Hut in Oldham, Greater Manchester, after the van went up in flames at 4.20am.

The owner of the stall, based at children’s amusement park Kaly’s Playland, claims the horrific incident is the latest in a string of violent attacks.

Muzafar Iqbal, 35, says he is ‘lost for words’ after allegedly being targeted by arsonists and yobs multiple times since opening the business one year ago.

Speaking to The Oldham Times, he said the guard was in his car when a brick was thrown through the window this morning.

Two men forced him out of the vehicle, before four more joined to hit him on the arm with a large stick, Mr Iqbal said.

They set the site on fire, before fleeing ‘in the guard’s car’, it’s claimed.

It comes after Uncle’s Tea Hut was ‘targeted by arsonists’ while based at an old site at Alexandra Retail Park in February.

Racist graffiti was allegedly spray-painted on the new premises on Havelock Street in June.

Mr Iqbal says petrol bombs have also been lobbed at the hut, while the owners been hit by a third arson attack since October.

He said: ‘I am not really sure why we have been targeted. I am lost for words at the moment. I don’t know why these people have done it so many times.’

Greater Manchester Police said: ‘Prior to the fire, a male who was guarding the van was assaulted by 5 men who made off in his car.

‘A joint investigation with the fire service is ongoing to establish the cause of the fire.

‘No injuries have been reported to police at this stage and no arrests have been made yet.’

Greater Manchester Fire and Rescue Service said one person was left injured in the incident on Wednesday.

‘One casualty was checked over by firefighters. We were there for about two hours and 15 minutes.’

The North West Ambulance Service said they were told one person was making their own way to hospital this morning.