Two nightclubs have had their licences suspended after a doorman was stabbed and fights broke out at the venues. 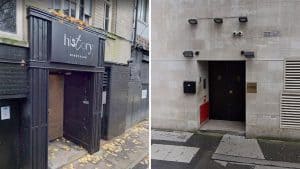 Greater Manchester Police (GMP) were then called to separate fights at History and Cirque, on nearby Queen Street, a week later.

The committee agreed to shut the clubs ahead of a review hearing in October.

The Local Democracy Reporting Service said the managers of both clubs were not opposed to the licence suspensions.

PC Stuart Hammersley told a licensing hearing that the History doorman was stabbed on 12 September when a man tried to re-enter the club after being ejected.

He said a man had been arrested on suspicion of wounding with intent.

He said a week later, about 100 people gathered outside at about 01:00 BST and forced their way inside, with CCTV showing “a few people trampled on the floor”.

Officers sent to help found some door staff were not wearing high-visibility jackets, a requirement of the club’s licence.

The PC said officers had returned three hours later when a further fight broke out and “felt that the management and security… had lost proper control”.

Club manager Mohammed Mohamud thanked police for their help and admitted staff were not wearing the correct jackets, but his solicitor Richard Williams disputed claims that there were insufficient door staff.

The hearing was also told a fight broke out in the VIP section of Cirque on 19 September and a man was knocked unconscious.

PC Christine McIntosh said those involved were split up and escorted out through separate exits, but the fighting continued outside where metal barrier poles and ropes were “used as weapons both by the door staff and the customers”.

She said the club’s failure to properly record customers’ details had hindered an investigation into what happened.

Cirque’s solicitor Rebecca Ingram said the club’s management “understand the seriousness of the incident” and had agreed to close the venue until investigations had concluded.

A further hearing was arranged for 15 October.