An ‘evil’ bouncer once jailed for beating his ex-girlfriend was working illegally as a doorman when he raped a clubber on a Christmas night out, it can now be revealed. Vile predator Iyoseph Derry preyed upon the woman before raping her in a car. 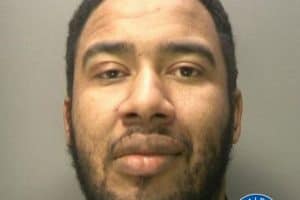 Despite his chequered past as a woman beater and dangerous, armed dealer ensuring his security licence was rejected, the 33-year-old bagged a job as a door supervisor at Wolverhampton’s trouble-hit Banjul Nightclub. It was there that he and fellow bouncer Hassan Bockarie were in a position to target the vulnerable reveller, watching on as she became more inebriated.

The twisted pair were jailed for a total of 18 years for the attacks in February, with Derry’s mugshot evoking trauma for his first victim – a woman whose ‘eye socket he broke’ a week into dating back in 2006. When she heard how her attacker went onto rape the clubber, the mum ‘felt she could still smell him and feel him breathing down her neck’.

“If he wasn’t working illegally, it never would have happened. People like him will never stop,” the survivor of Derry’s first attack, who did not wish to be named, told BirminghamLive.

She told how at the age of 19 she was left with an “eye the size of a golf ball” after he “broke my eye socket, dented my skull and sliced my throat with a knife” in a terrifying attack. He was jailed for a nine year extended prison sentence for wounding with intent and threats to kill.

Derry was released from prison and later applied for a licence with the Security Industry Authority – which confirmed he has never held a licence with them. His application was refused “due to his previous convictions”.

And though mitigation can be submitted after a refusal, Derry’s application was automatically rejected because of the lengthy sentence stained on his record.

“We refused his application due to his previous convictions. Under our licensing criteria (as published in ‘ Get Licensed’, page 29) a custodial sentence of more than 48 months results in refusal.

“Applicants may be able to submit mitigation depending on how long ago the offence took place. This was not an option for Mr Derry as his application was automatically refused.”

But that didn’t stop him seeking, and gaining, employment at Banjul Nightclub – where he found his victim while working on the door in December 2018. The crime-hit venue was subject to a licence review after three serious incidents, including a stabbing, in 2019.

It has since closed after having its licenced revoked, West Midlands Police confirmed. Derry was convicted of rape, as well as aiding and abetting rape, and jailed for ten years in February this year.

“The second I saw his face in the paper, it felt like looking at the same evil all over again. It was horrible,” Derry’s first victim, who is still recovering from the trauma, recalled.

“The woman that was raped by him, I guarantee she probably would’ve mentioned the same look – he gets this look and it is just pure evil. The look, that anger that he had in his eyes when he was punching me and I was screaming.”

She added “he doesn’t learn”, drawing upon his January 2021 sentence after 150 wraps of Class A drugs, worth £1,500 were found hidden in Kinder eggs and his jacket pockets.

When lifted for peddling crack and heroin, Derry had 12 convictions on his record for 30 offences, including violence and weapons. He had been arrested in Swindon just months after being released from an extended sentence and, while on bail for the drug dealing matters, was jailed for five years at Stafford Crown Court for possessing a handgun.

Speaking on his previous convictions, the survivor of Derry’s first attack added: “This advice is for every woman out there, make use of Clare’s Law, that states you can check a person’s background.

“Make use of the things that are put in front of you because when you don’t this is the type of s*** that happens. You date someone for a week and you end up with a life-time injury and the only person that suffers is you.