A homeless man told an Aldi security guard he wanted to go to prison before pulling a knife on him and walking around the store. 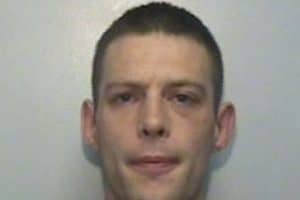 Lee Wright, 38, wandered into the city centre store, where he approached the guard and made the worrying claim.

The security officer suggested that he should go to the police, but Wright walked past him into the store before pulling out the five-inch blade.

In CCTV footage played to Manchester Crown Court, a woman can be seen pushing a pram past him as he held the knife.

Prosecutor Suzanne Hargreaves said Wright picked up a pack of protein powder worth £15 before attempting to leave the supermarket.

“The guard tried to apprehend him and encourage him to leave, but the deputy manager told him to let him go,” she said.

“A police officer was on patrol in the vicinity when a report was made about Wright brandishing the knife.

“Almost immediately, the defendant stepped out onto Market Street holding the knife.”

The officer asked him to put the blade down, which he did.

He told the officer: “I just want to be locked up, I’m in a very bad place.”

In a victim personal statement, the guard said the incident left him feeling in fear for his own safety.

“This unpredictable incident left me worried about what to expect,” he said.

“My opinion is that I believe he came into the store attempting to get help.”

Wright was said to have 18 previous convictions for 72 offences.

The court heard that he has benefited from being in custody, both physically and mentally.

“His actions were in part what led to his remand,” his defence counsel Thomas McKail said.

“He has received medication for his mental health problems and is no longer taking methadone.

“This occurred during the lockdown when there was no face-to-face contact in the mental health services.

Sentencing him, Recorder Timothy Hannam QC said: “It was brazen, and it must have been terrifying if seen.

“This has been described as a cry for help – the way you went about getting that help was disgraceful and it was selfish and it terrified the people you encountered.

“There was a risk of serious harm being caused and this was committed whilst you were on licence.”

Wright, of Princess Avenue, Tyldesley, was jailed for 22 months.

As he was sentenced, he told the judge: “I had no intention to hurt anybody.

“I just needed help as I was in a bad place in my head.”

Andover security guard Ashley Munn has been honoured with an award