AN Ellesmere Port man tried to set fire to a nightclub in the town after he was refused admission. 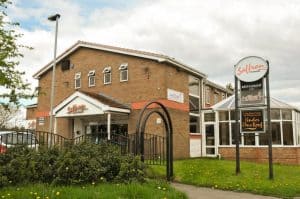 George Steven Davies, 29, of Woolton Court, Ellesmere Port stole a disposable barbecue set, firelighters and Cosilite from the Shell petrol garage and used them to start a fire by the fire exit at Club XES, Chester Crown Court heard on Monday, March 21.

When confronted with what he had done, Davies threatened to blow up the house of the nightclub doorman, before setting on fire a cup of petrol he had also stolen from the Shell garage.

Some of the stolen petrol had gone on Davies’s hands, and they also caught fire. Davies threw the cup in the direction of the doorman and the club’s DJ, missing them by a few feet.

The court heard Davies had previously attacked a father and son in Liverpool, with one of them knocked unconscious.

Judge Michael Leeming ruled Davies was a “dangerous” offender and handed an extended sentence for the arson as part of a jail term which totalled 80 months.

Prosecuting, Peter Wilson said the Liverpool offences happened on the night of March 24, 2019, at about 1.30am on Wood Street, near Popworld.

CCTV footage of the incident showed both the father and son, who had been looking for a taxi, were attacked without provocation by an unknown man, before Davies got involved and punched each of the two men at least twice.

In victim impact statements, the son said he was knocked unconscious and remembered waking up in distress on the pavement and seeing the condition of his father, who was more injured.

The son said the attack meant he could not concentrate on his final university exams.

The father was left with a head wound which required staples and left a six-inch scar on his head in the shape of a horseshoe. The wound had to be later reopened to treat an infection.

He also had three numb teeth, was taking medication for anxiety and suffering from PTSD.

The ongoing effects meant he could not take his other son, with special needs, on a once-in-a-lifetime trip to Disneyland Florida and a Caribbean cruise. The trip had to be rearranged and his carer went with the son instead.

Both said they used to enjoy going to Liverpool at least three times a year, but since the attack they said they will never visit Liverpool again.

Davies was arrested and released under investigation for the attack.

While on bail, Davies attended Club XES in Ellesmere Port at 1am on November 6, 2021.

He was refused admission as he had previously been barred for life for possession of a knife at the club.

Following an argument with the doorman, Davies walked to the Shell garage on Whitby Road and stole three instant barbecue kits and firelighters and a Cosilite, collectively worth £24.15.

He then started a fire next to the fire escape of the club, which was spotted moments later by the doorman, who alerted a staff member inside and the fire was put out with a bucket of water.

The doorman saw Davies, who in the meantime had stolen 46 pence worth of petrol from the Shell garage, and asked him: “What did you do that for? You’re risking people’s lives.”

Davies replied: “Because you wouldn’t let me in.”

The defendant then said he knew where the doorman lived and was going to “blow up” his house, saying he had more petrol on him.

The doorman replied: “You are going to bomb a house where little kids are.”

Davies continued to threaten the doorman, who was now joined by the club DJ, as he then took a mouthful from the petrol-filled cup and walked in the direction the doorman was going, while setting a small section of pavement on fire.

The defendant then lit the mug, but the petrol on his hands also ignited, and he threw the mug at the two victims, missing them.

The court heard an intoxicated Davies rang 999 and made threats to blow up a house, while carrying a wooden post with screws in it on Regent Street, damaging a garden fence and a bin so it fell over and spilled its contents.

Police arrived and had to use a Taser to arrest an unco-operative Davies.

The doorman, in a victim statement, said he no longer felt able to work in his position any more due to the threat he had faced, and had lost a job he had loved doing for years. The DJ did not provide a victim statement but had told police the thought of the cup of petrol hitting him ‘scared him to death’.

Davies had 12 previous convictions and was in breach of two suspended prison sentences.

Defending, the court heard five character references had been submitted for Davies, telling of a man with a more compassionate side who was a good family man and in work, despite learning difficulties and mental health issues.

Chris Hunt, defending barrister, explained the Liverpool attacks had arisen from Davies believing the man who he was with, and had attacked the father and son, was actually the victim, and that was why he had intervened, but he accepted Davies had to be restrained by a member of the public after the punches.

The incidents in Ellesmere Port had come when Davies was also intoxicated, and he expressed remorse for his “stupid” behaviour.

The petrol had been taken after the arson attempt, and no-one had come to physical harm except the defendant.

Judge Leeming said the father and son in Liverpool had been victims of an “unprovoked and gratuitous” attack, while “mercifully” there was very little damage from the attempted arson, thanks to the actions of the doorman.

Davies was handed a 20-month sentence for the attacks in Liverpool, plus six months for breaching a suspended sentence. For the attempted arson, he must serve two-thirds of an additional 54-month sentence behind bars before he can be eligible for parole.