A thug who bit an Alton Towers security guard and cut a police officer’s frontline career short when he threw him to the ground after a chase through the Black Country has been jailed. 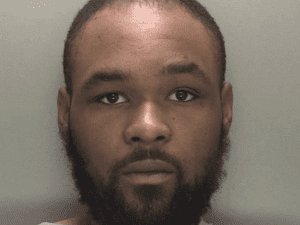 Lorenzo Brown has been locked up for three years for attacking Pc Richard Harris, who has been off work for more than a year and is yet to regain full movement of his left arm.

The officer had Tasered Brown when he found the 27-year-old hiding in a garden after a 90mph chase which ended when Brown crashed head-on into a family car, leaving a nine-year-old boy with a broken collarbone.

Brown, of Ripley Grove, Dudley, was already on bail at the time of the incident in January last year after punching, biting and eye-gouging security staff at Alton Towers when he was caught stealing a woman’s phone in 2018.

He has now been jailed after pleading guilty to dangerous driving, causing grievous bodily harm to Pc Harris and assaulting the boy who was in the car he crashed into.

Pc Harris also suffered a displaced fracture to his collarbone, and told Warwick Crown Court: “Since this date I have been away from work and have struggled with the aftermath.

“I have regained 70 per cent of movement in my left arm, but am awaiting a further surgical procedure. It has left me in constant pain and with limited mobility to the shoulder.

“I have been told that due to my injury I will not be allowed to return to front-line duty.”

He said he had joined the force in 1997 with the sole intent of being a front-line officer for 30 years, and added: “I am saddened that my career may now be stopped as a result of this person’s reckless behaviour.”

Brown reached 90mph in a BMW stolen the day before on Stourbridge Road where a police car video showed him crossing onto the wrong side of the road on January 26.

As he drove the wrong way round the Scotts Green Island, he smashed head-on into a VW Passat, injuring a mother and her two young sons.

Brown made off on foot, and Pc Harris lost sight of him until a member of the public pointed him towards the garden of a nearby house – where Brown was hiding behind wheelie bins.

Footage, played in court during an earlier hearing, showed Pc Harris pointed his Taser at Brown and repeatedly ordering him: “Come to me, come to me.”

Brown, who had previous convictions for dishonesty and violence, eventually emerged after the officer threatened to Taser him, and was ordered several times to get down onto the ground.

Brown went onto his knees but would not comply with an order to lie face down until Pc Harris fired his Taser, hitting him in the chest.

Even after lying face down, he refused to put his hands behind his back and as Pc Harris took one of his wrists, Brown got to his feet and threw the officer to the ground.

Brown pulled the officer’s radio from his uniform and escaped but was arrested at Wolverhampton’s New Cross Hospital in February after being recognised from the bodycam footage.

The incident came 18 months after he stole a phone, two credit cards and £20 note a woman had left in a caged area at Alton Towers while going on a ride.

Prosecutor Jonathan Veasey-Pugh said Brown, who was with a group of friends, was challenged by security staff and first handed over the phone and then the case, claiming he had found them and was going to hand them in, but the cash and one of the bank cards was missing.

He then became aggressive, punching one of the security officers five times to the head, biting his shoulder and then stamping on his chest after he went to the floor.

Brown tried to rip a bodycam from a second security man’s jacket and pushed him against a wall, and then pressed his thumbs into the eyes of a third member of the security staff, as well as resisting when a police officer arrested and handcuffed him.

Seamran Sidhu, defending, said Brown had a history of physical and mental health problems, and an issue with his leg had led to him being confined to a wheelchair for earlier hearings and having to have keyhole surgery.

She said there was another side to Brown, who was ‘a talented musician’ and volunteered at a food kitchen, and he had written a letter of apology to his victims.

Sentencing Brown and banning him from driving for four years and nine months, Judge Peter Cooke told him: “You were engaged in a very bad example of a police pursuit. It resulted in you colliding with another vehicle, and the car you were in and that other car were both written off, and a mother and her two children were all injured.

“On that same day your encounter with Pc Harris occurred. It has for him had the gravest of medical, psychological and career consequences. He was an emergency worker, serving the public interest as he had for many years.

“I accept this was not an egregious piece of violence by you, it was you engaging in a struggle in your determination to get away from him which had consequences of unintended gravity.”

The judge acknowledged that Brown had written a letter apologising to his victims, in which he said of the injury to the boy: “I would like to apologise to his mother and to him. I obviously did not mean to injure them and I regret the effect my actions have caused them.

“Secondly I would like to apologise to the officer who was injured as he tried to detain me.”

As well as the three-year term, he was given a consecutive six-month sentence for theft, assault and two offences of common assault, to which he eventually pleaded guilty after originally denying the charges relating to the Alton Towers attack.