A VIOLENT man seen throwing punches at people on Carlisle’s Botchergate told a bouncer who tried to restrain him: “I’ll get you slashed.” 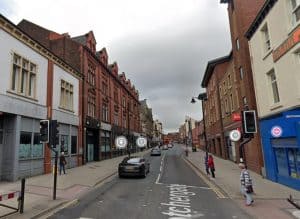 But magistrates in the city were told that 23-year-old Martin McGroary’s aggressive behaviour resulted from the combined effects of strong emotion, and mixing alcohol with medication for the condition ADHD.

The defendant pleaded guilty to using threating behaviour that put people in fear of immediate violence.

As police were making their way towards McGroary, they saw him throw another punch, which resulted in a man who was nearby falling to the ground. With the help of club door-staff, the defendant was restrained.

“While he was on the floor, being handcuffed, his language was abusive and threatening,” said Mr Shelley. McGroary said he would beat everybody up. It was at this point that he threatened to have the bouncer slashed.

The defendant’s criminal history included convictions for public order offences and a firearms offence from 2019, for which he was jailed.

Kate Hunter, defending, said there could be no dispute about the facts of the offence and the defendant accepted this. What was more relevant, she said, was the affect on the defendant’s behaviour of his recently diagnosed ADHD, and the medication he was now taking for this.

The condition was identified during his recent prison term for the firearms offence. As a result of the diagnosis, McGroary now takes medication.

On the night in question, the defendant had been drinking after taking his ADHD, and while the effect of that did not constitute a defence it may well have contributed to who he behaved as he did.

“Having read his words in the [offence] summary, he was shocked to see the extent, and the repeated extent, of what he actually said on that night,” said Miss Hunter. McGroary had come to Carlisle to visit family.

Explaining his behaviour, she added: “It was that combination of drinking, medication, and his emotional state at that time which has landed him before the court.”

Employed as a roofer and builder, the defendant, of Ayr Hill Road, Rigside, Lanark, South Lanarkshire was now holding down a job and was supported in court by his partner. They already have a three-year-old and another child was on the way.

He now recognised the risk of mixing drink and medication and thus had not had alcohol since the incident and not been in trouble.

Magistrates said they needed a background report from the Probation Service before they can pass sentence. They adjourned the case until May 30 and granted the defendant bail until that day.