A MAN moonlighting as a doorman alongside his partner beat a hasty retreat when his ex-partner turned up at the Accrington pub. 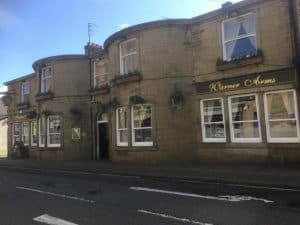 Blackburn magistrates heard there was a clash between the two women which resulted in the police being called and Dylan Kurt Tattersall being exposed as working without a Security Industry Authority licence.

Tattersall, 35, of Henry Street, Rishton, pleaded guilty to working as a doorman when not licensed. He was fined £166 with £350 costs and £32 victim surcharge.

Curtis Lij-iyasu, prosecuting for the licensing authority, said Tattersall was working as a door supervisor at the Warner Arms in Accrington on November 29.

“The police checked CCTV footage which did not show any offending but did show the defendant working as a door supervisor,” said Mr Lij-iyasu.

“The defendant had signed in using the licence of a bona fide security officer.”

Jonathan Taylor, defending, said Tattersall’s girlfriend was working as a door supervisor at the Warner Arms and they were short staffed.

She asked him to help and told him to sign in using the name of a registered supervisor.

“Out of misplaced loyalty he said he would help out,” said Mr Taylor.

“He is a mechanic and had no idea what was required and he never made a penny out of the enterprise.”

He said his client’s ex-partner turned up and there was a commotion with his new partner.

“At that point he thought, ‘I don’t need this’, and left,” said Mr Taylor.

“He didn’t think he was doing a great deal wrong, he was just helping out.”

A Bradford man was convicted of working illegally without a licence