A FORMER ST Dogmaels man has been jailed for five-and-a-half years for assaulting a security guard at a charity event in New Quay and leaving him permanently disfigured. 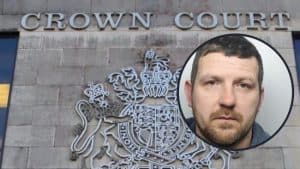 Philip Nicholas Ladd, aged 38, was found guilty of assault causing grievous bodily harm after biting off a large section of a man’s ear in March 2019.

The court heard that the incident had happened while Ladd was living at an address at Ffos-y-Ffin, near Aberaeron.

Dyfed-Powys Police were called to New Quay Football Club following the incident, which saw the 38-year-old react violently when he was stopped from going back inside the venue by a security guard.

After punching the victim to the head, Ladd bit the member of staff’s ear and spat out part of it on the floor in front of him before leaving in a taxi.

The victim, who was taken immediately to hospital, says the injury has left him feeling conscious about the way he looks.

In a victim impact statement, he said: “This was not simply an assault that to an extent you are aware could happen working as a security operative at events.

“This was a cruel, vindictive attack that has resulted in an injury that will never truly heal, and I will often be reminded of what happened to me.

“It was very difficult for me to go back to work, but I have managed this out of necessity to support myself and family.

“It still remains difficult for me as I fear that I could again get attacked, simply for doing my job.

“I should not have to feel like this and I did not before this incident.”

An investigation into the incident saw officers interview a number of witnesses and assess CCTV footage from the area around the venue to establish the identity of the suspect.

Ladd was arrested within hours of the incident being reported, and officers continued to investigate the offence – examining DNA samples from both the defendant’s mouth and the victim’s ear.

He denied the offence and was found guilty of assault causing grievous bodily harm at a second trial.

He was sentenced to five years and six months in prison.

Officer in case Detective Sergeant Steve Barry said: “This was an incredibly violent incident, which saw the defendant lash out at a security guard who was simply doing his job.

“Ladd was told he could not go back inside. The way he reacted to this was totally unacceptable and has left the victim with a permanent reminder of the assault.

“We are pleased that the hard work of investigating officers in putting together the file of evidence led to a conviction, and hope the sentence goes some way to providing comfort to the victim.”